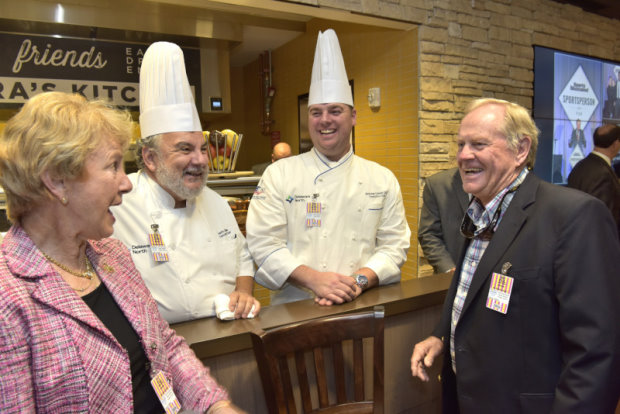 The 2,800-square-foot restaurant, which seats up to 100 people, features memorabilia and family photos hand-picked by Jack and Barbara to connect customers to the storied legacy of golf history’s greatest champion, ambassador, course designer and philanthropist. But while the Golden Bear Grill certainly celebrates the game of golf, it also celebrates the life and lifestyle that surrounds the game.

Barbara worked closely with Delaware North to design the warm, inviting and comfortable interiors. Meanwhile, a team of chefs serves up comfort food, with many of the recipes featured coming from Barbara and her daughter Nan’s cookbook, Well Done! 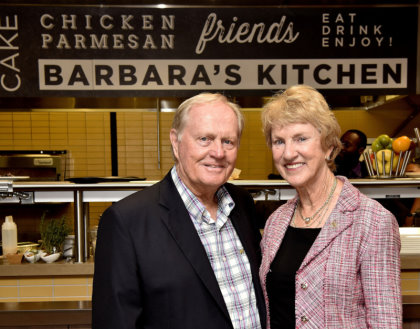 Items including ‘Jack’s Favorite Greens’, a salad with romaine and iceberg lettuce, gorgonzola, red onion and smoked bacon; meatloaf; chicken parmesan; and ‘Buckeyes’, a chocolate peanut butter treat paying homage to Jack and Barbara’s home state of Ohio, are some of the featured items straight from the Nicklaus family’s kitchen.

“We’ve been looking for a place where we could partner with Jack and Barbara on a product since we first met and I’m truly happy that it has come to fruition,” said Jeremy Jacobs, Chairman of Delaware North. “With the Golden Bear Grill, we’re sure Jack will help bring customers in, but it’ll be Barbara and her recipes that will keep them there.”

The Jacobs and Nicklaus families have a long history, and according to Jack, bringing this personal relationship into a business partnership was a natural fit.

“You might say I am a food aficionado—which, translated, means I like food quite a lot—and Delaware North is a leader across the country in delivering great dining experiences, so partnering with them made sense,” said Nicklaus, who was among the pioneering athletes to leverage his success and name to create a brand. “Delaware North is well-respected in the business and they’ve done a great job everywhere they’ve been. Golden Bear Lemonade by AriZona Beverages was our first foray into food and beverage in April 2012. We also introduced wine through our partners at Terlato. And most recently, we teamed up with The Schwan Food Company to launch Jack Nicklaus Ice Cream.

“As with life, a lot of great things happen through relationships… It’s a nice way to get started and keep the brand moving.”

The restaurant complements the Nicklaus Companies’ portfolio of licensed products—especially those in food and beverage. And it also furthers their mission to tie in charity. There are a number of Nicklaus-branded products that have a charitable tie-in, including: Nicklaus Golf Balls; Jack Nicklaus Wine by Terlato Wines; AquaHydrate water; Golden Bear Lemonade by AriZona, and Jack Nicklaus Ice Cream. Most of the products mentioned are available in the restaurant and each gives back to charity. The Golden Bear Grill is no exception, as consumers have the option to add a donation to the Nicklaus Children’s Hospital with every check.

“Golden Bear Grill gives us the opportunity to combine several of our licensed products into something that will last beyond our lifetime,” Nicklaus said. “Not many people will remember ‘Jack Nicklaus,’ but a lot of people will hopefully recognize the Golden Bear, and if we are able to impact the lives and future of children through our charitable work, that is a nice way to be remembered.”

A second Golden Bear Grill is slated to open at Charleston International Airport in South Carolina in September.

Sports Marketing Surveys Inc has changed its company name to Sporting Insights to better reflect its movement into the world of data analytics.