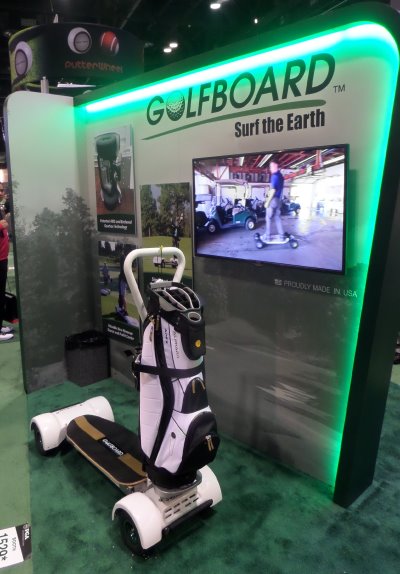 Golf Marketing Services (GMS) has been signed up by Frasercorp Ltd to handle PR for the exciting new 4WD GolfBoard™ single person golf transport vehicle within the UK market.

The deal between the two Hertfordshire-based companies was announced just days before GolfBoard won the “Best New Product” award at the 2014 PGA Merchandise Show in Orlando, Florida.

GolfBoard was developed by SolBoards Inc of Sisters, Oregon, and provides an exciting new way to get from one shot to the next on a golf course.

“We are delighted to announce that we have won the contract to distribute GolfBoard in Britain and are equally pleased that GMS has agreed to handle PR for the product,” said Justin Fraser Jones, Director of Frasercorp. “They have a proven track record promoting new products both in the UK and European markets and I have no doubt they will be able to replicate the buzz that GolfBoard has already created in the States.”

“I am just back from Orlando and can confirm GolfBoard caused quite a stir at the Show,” said GMS Director Neil Gray. “It offers something completely new in the field of on-course transportation and is likely to provide clubs with a useful new revenue stream from players who seldom elect to hire a traditional cart.

“It might just be what the game needs at the moment,” added Gray. “I can see it proving popular with existing golfers but also helping to bring a whole new generation of youngsters into the game.”