After the hugely successful inaugural year of the FJ ‘Walk of Champions’ in 2017, which encouraged golfers to get out on the golf course and track their steps throughout the season, FootJoy and Hole19 has announced the continuation of the partnership for 2018.

The FJ Walk of Champions campaign utilises Hole19’s GPS technology to monitor the number of steps its users walk on course, with golfers rewarded throughout the season with monthly prizes from FJ to encourage participation. The 2017 season concluded with almost 100 million steps walked by the entrants, helping to further highlight the health benefits associated with the sport. 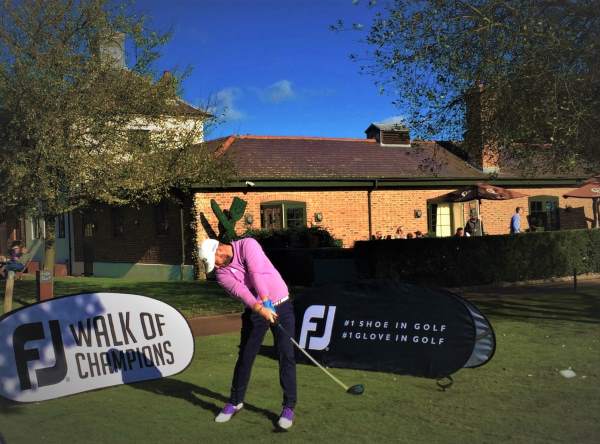 The innovative campaign, which saw nearly 10,000 rounds of golf entered into Hole19’s mobile app last year, culminated in the eight golfers who walked the furthest being invited to the FJ Walk of Champions Grand Final at European Tour host venue, The Grove. The finalists from across the UK and Ireland enjoyed a head-to-toe makeover courtesy of FJ, as well as a once-in-a-lifetime opportunity to meet three-time European Tour winner and FJ ambassador, Andy Sullivan, who conducted a Q&A and clinic for the guests.

For the 2018 season entrants will have a chance to win even more prizes. In addition to the 8 players that walk the furthest distance, two other lucky participants will be drawn at random to join this years’ Grand Final, giving all entrants an opportunity to experience the showcase event no matter when they sign up.

As well as the opportunity to compete in the Grand Final, golfers will again be rewarded with monthly and weekly prizes for leading the challenge, including FJ’s Tour-inspired footwear such as the Tour-S or Pro SL golf shoes. Additionally, five golfers will be picked at random each week to win a selection of spot prizes, including FJ polo shirts and FJ gloves.

“We’re delighted to be continuing our partnership with Hole19 after an extremely successful first year of FJ Walk of Champions,” noted Paul O’Hagan, FJ Marketing Manager. “We’re already looking forward to seeing this year’s winners at the Grand Final and are excited to be able to offer the additional two spots this season, ensuring golfers are able to make the

event no matter when they join the campaign!”

Anthony Douglas, CEO and Founder of Hole 19, commented: “We’re immensely proud of the Walk of Champions campaign and how it encourages people to get out on the golf course. It’s fantastic to offer the opportunity for all golfers to compete, regardless of ability – whilst also encouraging participants to stay out on the course for longer! We look forward to continuing with the initiative in partnership with FootJoy; once again connecting ourselves with an equally forward-thinking, brand, helping to introduce this unique angle to the sport.”