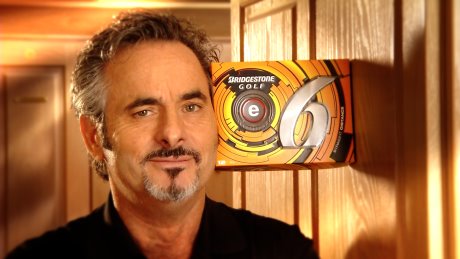 Bridgestone Golf, undisputed No.1 ball-fitter in the game, is using celebrity  presenter and former Ryder Cup star David Feherty to promote its new e-Series golf balls in the brand’s first ever TV advertising campaign in the UK this Spring.

Feherty, who played for Europe at KiawahIsland in 1991 and has since become a naturalized American citizen living in Dallas, enjoys celebrity status in the U.S. with his own TV show on the Golf Channel and a prominent commentary role in CBS coverage of PGA Tour events.

He will introduce two 30-second advertisements to be screened during six days of Sky Sports’ Masters coverage in April, conveying Bridgestone’s ‘you have to compress it to boom it’ theory behind its range of golf balls, including the new 5, 6 and 7 e-Series balls launched last month.

“Bridgestone’s TV commercial debut here is part of our biggest ever golf ball drive in the UK market,” said Steve Kettlewell, MD of Bridgestone Golf UK. “And David is the perfect presenter – mixing golfing logic and quirky humour to deliver the ‘play what fits your game’ message to more British golfers.”

Bridgestone Golf won the 2012 Network of Golf award for its original series of ‘In the Lab’ TV commercials featuring Feherty as the ‘Professor of Bridgestone University’. In the latest adverts he assumes a different role as a college lecturer.

Feherty, who was born in Bangor, Northern Ireland, and won five titles on the European Tour, also features in press ads promoting the e-Series balls asking: ‘Be honest. Who has the better dimples?’ that will appear in golf consumer magazines over the coming months.

The new Tour team accounts for 21 Major titles and more than 350 tournament wins between them, with each member playing a different Bridgestone golf ball to suit their individual swing speed.