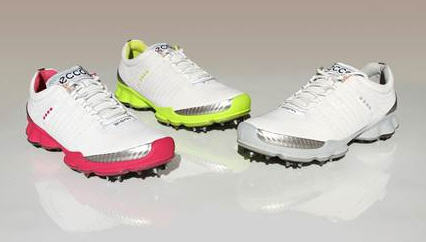 The tournaments were a phenomenal success for ECCO, with visitor’s interests primarily revolving around the technologically advanced BIOM shoe and the versatile Golf  Street shoe. This not only proves the popularity of these shoes, but also the wide-ranging gender and age appeal that they have.

Sales at all three events were fantastic, particularly at the Open Championship at Royal St George’s, where the company recorded their strongest figures ever. Showing the demand for the products, some of the BIOM designs had sold out by Saturday morning of the tournament.

ECCO’s lead UK sales agent, Trevor Milsom, said: “Not only are we overjoyed with the sales figures, I was personally thrilled to see that over 80% of enquiries about our shoes were regarding either the BIOM or Street shoe.

“It’s clear that there is a general shift away from more traditional golf shoe designs among all age groups. The sales for the BIOM shoe in particular were through the roof; it looks like this shoe could really be the start of something special.”

BIOM is a convention-breaking shoe that follows the foot’s natural system for absorbing impact to enhance stability while strengthening muscles in the feet and lower legs.

The first and only Natural Motion golf shoe, BIOM Golf also features a game-enhancing swing platform. This brings men and women closer to the playing surface, improving ground feel and stability during all phases of the swing.

BIOM Golf was designed using decades of ECCO research into the human foot, including scans of more than 2,500 feet to create the perfect fit. It follows successful launch of ECCO Natural Motion shoes in the premium running, walking and training categories.