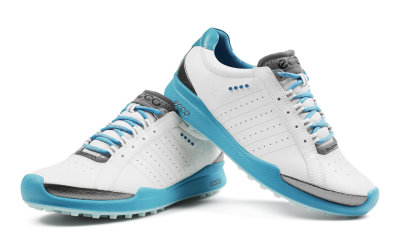 Danish brand ECCO – a leading global manufacturer of innovative footwear – announces that it has been named “Official Footwear Supplier” to the 2013 European Solheim Cup team and will create special-edition shoes exclusively for the squad’s players and captains.

For this, the fourth Solheim Cup during which ECCO has supported Team Europe, the company will also provide shoes to the defending champions’ caddies and team staff. The competition will be held at Colorado Golf Club outside Denver, August 13-18.

“ECCO has long been a part of the family of sponsors and suppliers that help to make the Solheim Cup one of the world’s most outstanding sporting events,” says Marc Anderman, European Solheim Cup Manager. “All the ladies look forward to receiving the special-edition shoes, which embody the team spirit that will help us retain the Cup.”

A biennial, trans-Atlantic team match-play competition, the Solheim Cup features the best U.S.-born players from the Ladies Professional Golf Association (LPGA) Tour and the best European members from the Ladies European Tour (LET). Team Europe enters the competition holding the Cup and will need 14 points to retain it, with the U.S. Team requiring 14½ points to regain the coveted Waterford Crystal prize, which was first presented in 1990.

“With the supreme levels of talent on both sides of the Atlantic, this competition will likely go down to the wire once again,” says Jesper Thuen, ECCO Global Sponsorship and PR Manager – Golf. “That makes for a compelling spectacle, during which the ECCO Golf collection will be showcased to fans around the world.”