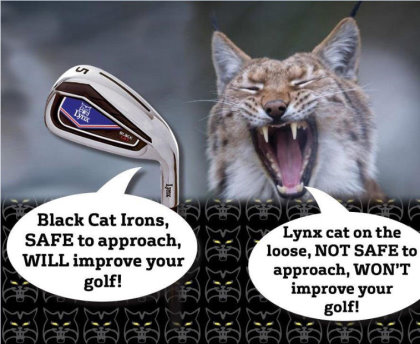 The Lynx that escaped from Dartmoor Zoo isn’t the only Lynx that’s grabbed everyone’s attention…another big cat is on the loose and stalking the golf industry.

British golf manufacturer Lynx is one of the fastest-growing equipment brands in the game with its Predator and Black Cat clubs in particular proving to be ‘fair game’ for legions of PGA Professional stockists.

And one of its Tour ambassadors, Lydia Hall, has pounced into a run of form which saw her become the first ever female golfer to win a national PGA tournament against male counterparts, when she lifted the recent Wales National PGA Championship last week.

Hall, who combines competing on the Ladies European Tour with life as a PGA teaching professional, also recently won the WPGA One Day Series at Kedlestone Park and finished sixth in the LET Tipsport Golf Masters.

Lynx Golf co-owned Stephanie Zinser, joked: “The cat is very much out of the bag…rest assured there is certainly more than one Lynx that’s loose in the UK and causing a bit of excitement.

“This year has seen considerable growth for us, particularly driven by sales of the new Predator and Black Cat ranges of clubs. The response from stockists has been fantastic, particularly since we made our Predator range open stock for those who might not wish to invest in a whole set in one leap.

“We hope the Devon Lynx is safely captured soon, but if golfers want to snare their own Lynx then there are plenty of PGA stockists out there who’ll help them to find the right club for their game. There’s no need to dial 999 if you see one of our Lynx clubs anywhere!”

Devon Zoo took delivery of the animal on Wednesday from Port Lympne wildlife park in Kent and settled him into his new house before he escaped that same night.

With over 660 active accounts, Lynx now boasts three permanent Demo Day staff available for both stockists and non-stockists, and they remain one of the most forward-thinking companies in golf.

Lynx is dedicated to supporting ‘green grass’ Pro shop business and to offering exceptional equipment for use by golfers at all skill levels.