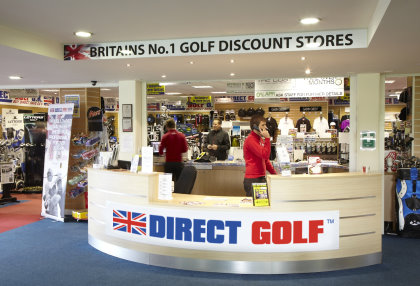 Direct Golf has begun the New Year with a flourish after announcing record-breaking quarter 1 sales figures for the winter and festive period.

The Huddersfield-based golf retailer saw sales in the period, which included a bumper ‘Black Friday’ promotion and Christmas sale, rise by 23% against 2013’s figures.

Sales made via Direct Golf’s e-commerce platform were also another huge cause for celebration, rising 39% from last year, while the company’s retail stores saw an equally pleasing 14% jump in sales. Crucially, margin has also increased significantly both online and in-store.

The Christmas sale – which was scheduled to run from December 23 until January 5 – was eventually extended until January 12 in response to overwhelming demand which saw almost 500,000 visitors to the Direct Golf website.

These hugely satisfying figures are the latest proof that Direct Golf, the UK’s biggest online golf retailer, is continuing to defy the overall downward trend in the golf industry.

While their competitors struggle in tough industry conditions, Direct Golf owner and founder John Andrew is targeting continued growth of the business he founded in 1991.

Direct Golf have also been quick in using their new-found investment to bolster their senior management team, with the addition of golf industry powerhouses Peter Riordan and Lee Brown coming at the end of last year.

Owner John Andrew said: “We’re thrilled to release these latest figures, which really show that Direct Golf is in a fantastically healthy position.

“Sales are up, margin is up, and that’s good news for us as a business, but also for our loyal customers too, who will continue to benefit from even better prices, stock levels and service as the business grows and grows.

“I always call the period around Christmas and New Year our ‘Golden Period’, and this year more than ever it was a really shining example of what Direct Golf is all about.

“It really bodes well for 2015, and gives us the right sort of momentum to make this year even more successful and profitable than 2014.”

Direct Golf UK has enjoyed massive growth in 24 successful years of trading. Starting with one small shop in Huddersfield, it now has 20 retail outlets nationwide and a significant portion of the web and mail order golf market.