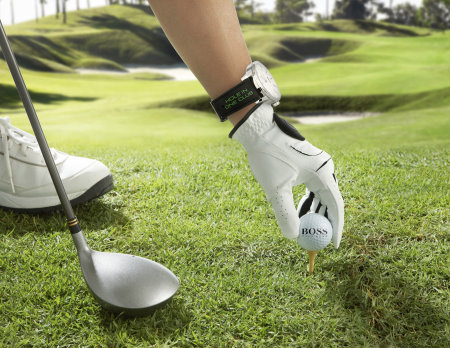 And, this year, BOSS Watches has commissioned a specially designed ladies’ watch to go alongside the unisex version offered in 2013.

The new season for the BOSS Watches H1Club tees off on Monday, April 14 – the day after the conclusion of the US Masters – and, once again, each golfer lucky enough – or skilful enough – to record a verified hole-in-one in a club competition will receive a limited-edition timepiece and membership of the exclusive BOSS Watches H1 Club, launched in association with The Daily Telegraph and HowDidiDo, Europe’s largest golfing community, with access to exclusive benefits and H1 Club merchandise.

Around 1,800 UK golf clubs currently use HowDidiDo – a web-based social network for golfers – and anybody playing in official club competitions at one of these clubs will be eligible, ensuring thousands of golfers have plenty of opportunities to cash-in.

Stephen Brydon, commercial director for MGS Distribution, the official licensed UK distributor for BOSS Watches, explained: “We were overwhelmed with the positive response to the launch of the BOSS Watches H1 Club last year. Scores of people emailed us to thank us for the watch and many more simply to say what a great concept the club was.

“They shared the same view as we did, in that golfers should have something tangible to show for their efforts in recording a hole-in-one – possibly the most memorable thing they’ll achieve in golf – and not just be out of pocket after buying a round of drinks in the clubhouse.

“You only have to see the happy, smiling faces in the photos winners have supplied to us to see how much it means to them. It’s really gratifying for all of us involved to be able to add to the memory in this way.”

No notification is required to participate in the main BOSS Watches H1 Club programme as all official club competitions are recorded on the HowDidiDo system, so holes-in-one will be noted and automatically ratified by the golfer’s club.