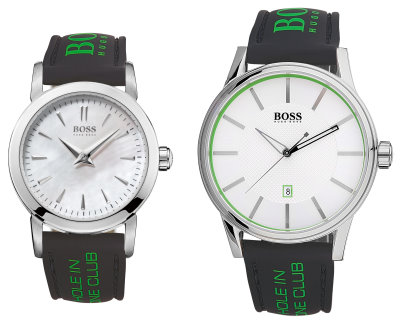 More than £1m-worth of exclusive BOSS Watches have been given away to club golfers who have scored a hole-in-one since the H1Club launched in 2013 – and the luxury German brand has vowed to continue its generous reward throughout the 2015 season.

In total, more than 4,700 watches have been presented to skilful – or lucky – club members in the UK and Ireland during that time. And, laid out lengthways, the watches would cover the distance of Augusta National’s famous Amen Corner … and still have enough left over to cover its par-three 12th hole again!

During that time it has seen some headline-making hole-in-one stories including two golfers who scored two aces in one round, and the recording of a new British record distance for an ace of 408 yards!

The majority of stories behind the aces are more prosaic, but, whether the distance is 408 yards or merely 80 yards, each successful golfer receives a limited-edition timepiece as a keepsake to remind them of their special moment.

The new season for the BOSS Watches H1Club tees off on Monday, April 13 – the day after the conclusion of the US Masters. Once again, each golfer recording a verified hole-in-one in a club competition will receive a limited-edition timepiece and membership of the exclusive club – launched in association with The Telegraph and HowDidiDo, Europe’s largest golfing community – with access to exclusive benefits and H1Club merchandise.

More than 1,800 UK and Ireland golf clubs currently use HowDidiDo – a web-based social network for golfers – and anybody playing in official club competitions at one of these clubs will be eligible, ensuring thousands of golfers have plenty of opportunities to earn themselves a stylish new watch.

Stephen Brydon, commercial director for MGS Distribution, the official licenced UK distributor for BOSS Watches, explained: “We have been delighted with the overwhelmingly positive feedback we have had for the BOSS Watches H1Club in the past two years. So many golfers have taken pleasure in sending us an image of them with their new watch – and we’ve had many emails just thanking us for the gesture.

“It feels good to be able to provide a permanent reminder to golfers of what is – regardless of age and handicap – a very special and memorable moment.”

No notification is required to participate in the main BOSS Watches H1Club programme as all official club competitions are recorded on the HowDidiDo system, so holes-in-one will be noted and automatically ratified by the golfer’s club.