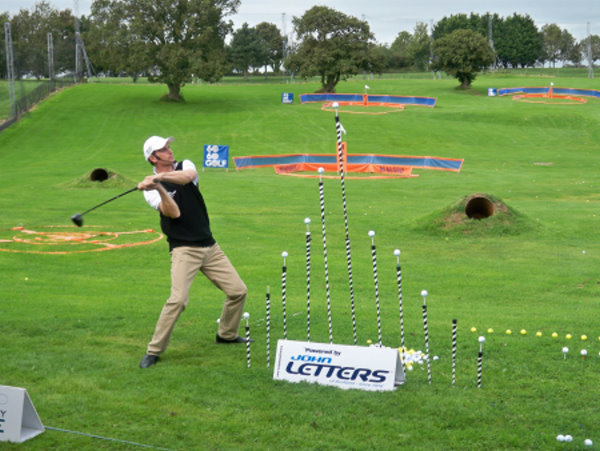 China Fleet Country Club has become the latest golf facility to install 60 60 Golf, the fast and affordable new alternative to the more traditional form of the game.

Officials at the popular Country Club near Saltash, Cornwall, brought in world-famous trick shot artist, Jeremy Dale, to celebrate the installation of 60 60 Golf at their driving range earlier this month and it already looks like the decision to install the new game is working a treat as far as their business is concerned.

“I am delighted to say that 60 60 Golf has proved very popular since we installed it four or five weeks ago and believe it has already started to increase footfall here at the range,” said the club’s Golf Manager, Linda Goddard.

“It would be fair to say it was mainly our younger customers who tried it first,” she added. “The older ones tended to take bit longer to give it a go but, once they got started, they enjoyed it just as much. I’m sure it’s going to be a big success.”

Linda admitted she came across the 60 60 Golf concept almost by chance while looking for a company who could supply new range targets.

“The range was looking a bit tired and it was while I was searching the internet to find new targets that I came across 60 60 Golf,” she said. “I was immediately struck by how friendly and helpful the people at 60 60 Golf were and when they explained they could help me kit out the range with a new concept that has been proven to boost business I decided to give it a go.

“All the signs are that it’s not going to be a decision I will come to regret. Well over half our regular customers are already playing it and even those who haven’t tried it tell me they love the new look of the range.”

60 60 Golf was invented by Newcastle-based businessman, Craig Higgs, and it gets its name from the fact a group of players can hit 60 shots within 60 minutes.

Higgs came up with the concept as an attempt to arrest the long-term decline in participation in the golf and it has already attracted the support of the British Golf Industry Association (BGIA) who awarded it a £25,000 grant under the auspices of its acclaimed Grow Golf initiative. It has also been endorsed by Golf England.

Higgs believes that 60 60 Golf is popular because it is quick and affordable and breaks down the barriers which put some people off trying the more traditional form of the game.

It also appeals to participating golf facilities because it is inexpensive to set up and run.

Customers who visit China Fleet, the World of Golf in Sidcup, Grimsby Driving Range, Acanthus In Hull or one of the other 60 60 Golf centres dotted around the country will find the centres kitted out with all the targets, signage and other paraphernalia needed to play 60 60 Golf.

The concept offers multiple game options but the basic idea involves participants earning points for hitting shots at a series of targets. Players can play a game of 60 60 Golf by themselves or compete with their friends. There is also an interactive element available via a free smartphone App so participants at one 60 60 Golf centre can compete against players in other 60 60 Golf sites all over the country. To this end, new iPod stands have recently been installed at all 60 60 Golf Centres.

Golf enthusiasts can find out more about 60 60 Golf by logging on to www.6060Golf.com