Young golfers from around the world will be competing for honours in the 2013 U.S. Kids Golf European Championship – ensuring Scotland is playing host this summer to both the world’s current and future golfing greats.

Huge numbers of competitors are expected to travel to Scotland for the four-day tournament, which is held across five historic East Lothian links courses and all of them just a short drive away from Muirfield, venue for The Open Championship 2013.

Organised by the U.S. Kids Golf Foundation, it is hoped that this year’s U.S. Kids Golf European Championship – Europe’s premier junior tournament – will be the biggest yet.

The competition will see players as young as six years old challenging for the European Champion titles in various age groups, with many of them hotly tipped to be the golfing stars of the future.

Last year Reece Els, the 11-year-old nephew of former world No 1 Ernie Els, kicked off his international career at the competition. 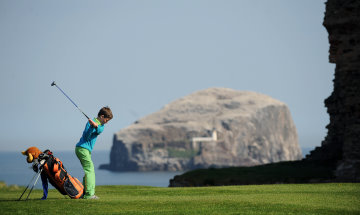 In the past competitors have travelled from such far flung nations as Australia, Venezuela, Namibia and Guatemala.

Dan Van Horn, President and founder of U.S. Kids Golf, said: “We are delighted that the European Championship has developed into one of the must-attend events in the junior golf calendar.

“Early indications are that this year’s competition will be another resounding success as entry numbers are already very healthy.

“I also think it is very fitting that East Lothian will be a golf mecca this summer as it also plays host to The Open at Muirfield – meaning that in the space of a month or so the best golfers, both now and of the future, will be on the same soil. That is very special and I think will add an extra buzz to this year’s tournament.”

The European Championships takes place from May 28-30 on Gullane No. 2, Gullane No. 3, Craigielaw Golf Club, Luffness New Golf Club and Longniddry Golf Club. The courses are modified for each age group in order to provide the same level challenge, meaning holes are progressively shorter as the age groups get younger.  It ultimately allows the players to reach the greens in the same number of strokes as the top pros on the PGA tour.

The top finishers in each category will compete in the Van Horn Cup over Gullane No 1 on May 31 – a showpiece event, modelled on the Ryder Cup, where the best European players are matched up against the top golfers from the rest of the world.  The top five finishers in each age and gender group also automatically receive an invitation to the U.S. Kids Golf World Championships at Pinehurst Golf Club, North Carolina, in August.

Tournament Co-ordinator Alasdair Good, Head Professional at Gullane GC, said: “The opportunity to play on some of East Lothian’s historic courses is one of the main reason why this tournament has become so popular.

“But with The Open being held at next door Muirfield, I’m expecting a surge of interest in this year’s event as interest in golf in Scotland grows – and that’s before you factor in the buzz that has already starting over the 2013 Ryder Cup at Gleneagles.

“East Lothian will provide an unrivalled opportunity this summer to see the cream of the emerging golf talent from Scotland, UK and the rest of the world – with the best pros from across the globe.”

Malcolm Roughead, VisitScotland chief executive, said: “We are delighted that the U.S. Kids Golf Championships is once again returning to the Home of Golf. Scotland is preparing to welcome the world at the Ryder Cup in 2014 but before then 2013 is a busy and exciting period for golf in Scotland and it is great news that the U.S. Kids Golf European Championships will kick this off in East Lothian just weeks before Muirfield welcomes The Open Championship.

“Scotland is committed to supporting the next generation of junior golfers and I can’t think of a better way to introduce them to the country that gave the game to the world than a fantastic tournament across some of our best links courses.”

The Foundation is the charitable branch of U.S. Kids Golf – the world’s largest producer of junior golf equipment. The firm has pioneered the development of golf clubs for young people, eliminating the problem of kids using heavier, cut-down adult clubs which often hurts developing swings and discourages budding players.