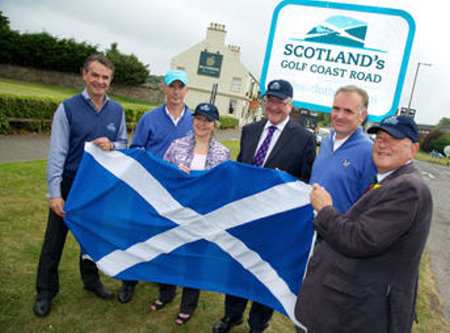 The road stretches from Musselburgh to Dunbar in East Lothian and incorporates 18 top-class golf courses along its 30 mile length, including the 2013 Open Championship venue – Muirfield.

Of course, the road has been in existence for some time but it has now been re-branded to reflect East Lothian’s title of Scotland’s GolfCoast.

The re-branding and eye-catching new signage along the route is the brainchild of the East Lothian Golf Tourism Alliance and East Lothian Council in a unique partnership between the private and public sector.

Councillor John McMillan, the council’s spokesperson for Economic Development and Tourism, said: “Local people and regular visitors to East Lothian will have been aware for quite some time that our golf offering is truly wonderful here. The Council has been working in partnership with golf-related businesses from accommodation providers to golf schools, through the East Lothian Golf Tourism Alliance, for a number of years now and we have been promoting East Lothian as a great golfing destination to people throughout the UK and across the world.

“We are now known as Scotland’s GolfCoast – a phrase we think says it all. It tells potential visitors where we are and that they can expect to find fantastic links courses here. This is backed up with a wealth of information on www.golfeastlothian.com

“We are delighted to have Mr Ewing along today to officially re-name our coastal route – and having the branding in place in time for the 2013 Open Championship means that the 170,000 or so visitors we expect to come to the tournament, plus the many more millions watching it on TV, will be in no doubt that they are looking at Scotland’s Golf Coast. We expect that many of these will come to visit us – and keep coming back for years to come.”

Tourism Minister Fergus Ewing said: “East Lothian’s claim to be ‘Scotland’s GolfCoast’ is richly deserved. Boasting 22 world class courses from Musselburgh down to Dunbar, East Lothian is a magnet for golf tourists who jet in from across the globe to sample the dizzying array of courses available.

“Golf tourism stimulates the local economy with hotels, bed and breakfasts, pubs and restaurants benefiting from the influx of visitors. Golf provides close to 20 per cent of the total employment in the region. What better time to explore Scotland’s golf courses and all the other fantastic attractions which are taking place in our outstanding natural landscapes than 2013, when we are celebrating the Year of Natural Scotland.

“Next month, the eyes of the world will be on Muirfield, this year’s Open venue. It’s a fantastic opportunity to underline why East Lothian is a world class destination for golf tourists.”

The Scotland’s GolfCoast branding is part of East Lothian Council’s ambitious 10 year economic development strategy, which will see the local authority work in partnership with other agencies and businesses to buck the economic downturn and put East Lothian on the map as one of the best places to live, work and do business in the country.
After unveiling the first of the new road signs in Musselburgh, Mr Ewing had the unique experience of playing on Musselburgh Old Course using a traditional hickory club.

The Old Course at Musselburgh is the oldest continuously played course in the world – dating back to 1672 – although it is widely believed that Mary Queen of Scots played here even earlier, in the 1500s. Visitors to the course today can still enjoy golf as it was played in those days by hiring hickory clubs for their nine-hole round.