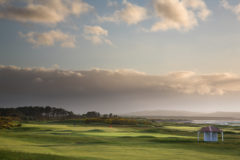 A new, authoritative list of the best courses in Scotland has named The Nairn Golf Club as one of the top tracks in the country. The renowned Highland course, which will host the Curtis Cup in 2012, was included in the top echelon after a panel of judges ranked Scotland’s top courses in terms of aesthetic appeal, routing, conditioning and historical significance.

Described in Golf World’s Top 100 Golf Courses in Scotland as featuring “some of Britain ’s best greens”, The Nairn Golf Club has been a regular in the magazine’s UK-wide and world listings. For the first time this new ranking series looks at the home nations individually and kicks off with Scotland because there are “more world-class golf courses per square mile than anywhere else on earth”, the report notes.

“Nairn is a classic, traditional out-and-back links, and the opening half a dozen holes along the coast rival anything at more illustrious Scottish courses,” said Jock Howard, commissioning editor at Golf World. “The putting surfaces are in immaculate condition and the variety of the examination never gets boring. I can’t think of anywhere I would rather be on a sleepy summer afternoon.”

“The authority of judging and the standard of the publication certainly make this a stand-out list,” said Graeme Govan, the club’s marketing convenor. “Nairn’s ability to deliver both on and off the course has ensured its inclusion in numerous lists, but this compilation is of particular note as it focuses solely on Scotland. With some of the best greens in the country and the handy work of several of the game’s legends on show, I think Nairn rightly deserves its place in the top 10.”