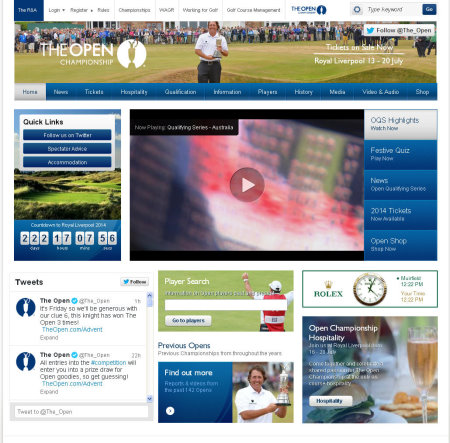 Independent research commissioned by Open Championship organiser, The R&A, highlights that this year’s Championship at Muirfield delivered a near £70 million benefit to East Lothian and Edinburgh. The comparable figure for Scotland as a whole rises to £88 million.

The £45 million destination marketing benefit is derived from a calibration study of primary research undertaken at the 2010 Open Championship in St Andrews by global sports marketing company, Repucom. A record 4,500 hours of Open Championship television coverage was broadcast from Muirfield, across 104 television channels, with a global audience reach of 501 million households.

The Open was played from 14-21 July at the East Lothian links and was won by American Phil Mickelson.

Commenting on the research findings The R&A’s Executive Director – Championships, Johnnie Cole-Hamilton, said: “Phil Mickelson’s victory enhanced Muirfield’s reputation for identifying top-class champions and we are delighted that the Championship also delivered a significant benefit to local businesses and the wider community.”

Councillor John McMillan, East Lothian Council Cabinet Spokesperson for Economic Development and Tourism, said: “The Open Championship at Muirfield was good for business and golfers around the world have had a timely reminder that playing golf in East Lothian should be high on their list of destination choices.”

Councillor Frank Ross, Economy Convener, City of Edinburgh Council said: “This is a great example of how the city region works together. We have worked in partnership with our colleagues in East Lothian and The R&A to maximise the impact of the 2013 Open Championship for the economy and promotion of the region.  The findings of this report confirm the positive impact of such major sporting events and the benefits they bring.”

VisitScotland Chairman, Dr Mike Cantlay, said: “The Open is staged in Scotland on average six years out of ten and it is a recurrent reminder to the world that this is the home of golf. These figures illustrate the importance of golf and major golf events to the Scottish economy and we look forward to welcoming the world’s oldest Major back in St Andrews in 2015.”

EDGA, the international body that encourages people with disability to thrive through golf, celebrated its 21st birthday today (March 4).