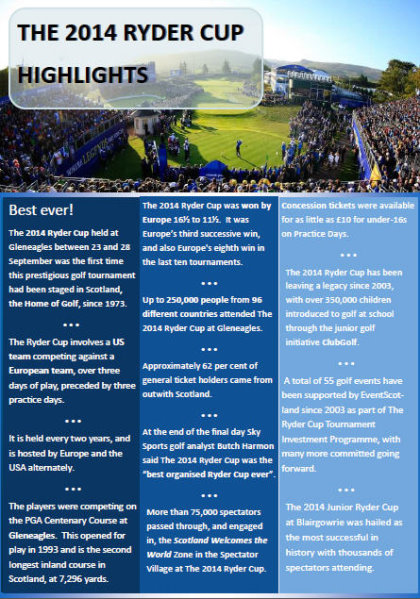 As the golfing summer in Scotland draws to a close with the Prostate Cancer UK Scottish Seniors Open at Archerfield this week, the country is celebrating an unprecedented 12-month period of being in the world’s spotlight, during which time more than 622,000 spectators attended golf events watched by hundreds of millions of fans around the globe.

The Archerfield event, which is one of the longest running on the European Seniors Tour, is the 11th international golf event to have taken place in Scotland in just 12 months and the 60th event supported overall as part of Scotland’s 2014 Ryder Cup tournament legacy programme since 2003.

And to coincide with the Prostate Cancer UK Scottish Seniors Open, the wider benefits of The 2014 Ryder Cup are being revealed with the publication of an independent study which shows the event at Gleneagles attracted more than 63,000 visitors from outwith Scotland and supported spend in excess of £106m for the host country.

Torrance, who was also a winning European captain at The Belfry in 2002, said: “This has been a phenomenal 12 months for golf events in Scotland. From the unforgettable scenes at Gleneagles last September to playing here at Archerfield this week in the Prostate Cancer UK Scottish Seniors Open, it has been an incredible year and shows what a wonderful country Scotland is for golf.

“Being part of a winning European Team in my home country was a special feeling and to see the major benefits it has brought to Scotland through spectator and visitor numbers, junior golf programmes and golf tournament legacy shows what a terrific event it was for the country as a whole.”

The 2014 Ryder Cup, held at Gleneagles in Perthshire during September 2014, was part of a landmark year for Scotland during which it also held the XX Commonwealth Games in Glasgow and the second Year of Homecoming Scotland.

Scotland’s Minister for Sport, Health Improvement and Mental Health, Jamie Hepburn MSP, said: “There is no doubt The 2014 Ryder Cup at Gleneagles was a huge success story for Scotland. When the sun rose above the Ochil Hills on the Friday morning just before the first tee shot was struck, the pictures being beamed to more than 600 million homes around the world could not have shown Scotland in any better light.

“And now, with the publication of this independent study from the Sport Industry Research Centre, we can see the full extent of the major benefits The 2014 Ryder Cup delivered for Scotland. From huge numbers of visitors travelling from outwith Scotland and hotels reporting high occupancy levels to the introduction of the ClubGolf and Get into Golf programmes, which provide every child and family in the country the opportunity to play golf, it is clear that The 2014 Ryder Cup has cemented Scotland’s reputation as the Home of Golf and the perfect stage for hosting major events and delivered benefits across Scotland that we will be feeling for many years to come.”

Richard Hills, European Ryder Cup Director, said: “These figures published today demonstrate the wide spectrum of involvement that Ryder Cup Europe had with Scotland over a period of years in the delivery of The 2014 Ryder Cup. We are delighted they reflect so well on Scotland’s economy and the development of the game as a whole, whilst evolving the nation’s golfing product.

“They also reflect how actively The Ryder Cup became involved with the educational resource in the country. We are proud of this aspect and our continuing relationship and partnership with many events in Scotland.”

Backing up claims of Scotland hosting the “best ever” Ryder Cup, the report reveals high levels of spectator satisfaction with their Ryder Cup experiences ( 92 per cent), with 71 per cent of those attending reporting their experiences as excellent. Of the spectators who had attended at least one of the previous four Ryder Cups, 58 per cent rated Gleneagles as the best with a further 32 per cent indicating it was just as good as previous editions.

The reputation of Scotland was also enhanced from the event with 97 per cent of respondents agreeing that Scotland is the ‘Home of Golf’ while 95 per cent agreed that Scotland was The Perfect Stage to host The Ryder Cup. In addition, Scotland (amongst the home nations) was the most highly rated place to play golf with 95 per cent rating it as good/very good.

Mike Cantlay, Chairman of VisitScotland, which led Scotland’s preparations on behalf of The Scottish Government, added: “We take great pride in Scotland’s reputation as the Home of Golf and we are delighted that so many spectators agree with that fact. The 2014 Ryder Cup showed what Scotland can do on the world stage and we were honoured to throw open our doors to so many spectators from countries around the globe. Our Events Directorate at VisitScotland led Scotland’s preparations alongside Richard Hills and his team at Ryder Cup Europe and, in partnership with Gleneagles, delivered a visitor experience that was second to none.

“The fact that more than 10,000 spectators chose to extend their stay to the benefit of tourism businesses across Scotland is testament to that warm welcome and with such a high percentage indicating they will be making a return trip in the near future, we look forward to welcoming them many more times to Scotland, the Home of Golf.”

Councillor Ian Miller, Leader of the Administration at Perth & Kinross Council, welcomed the news that The Ryder Cup has supported £106 million in economic activity in Scotland.

Councillor Miller said: “The 2014 Ryder Cup and Junior Ryder Cup were magnificent for Perth and Kinross and we feel strongly that these events have left a powerful legacy here. The report published today reinforces the long term benefits that The Ryder Cup has had in Perth and Kinross.

“Every day we see the improved infrastructure in use by the local community and visitors, such as the new, safer A9 link road by Gleneagles Station and the 4G network now accessible in rural areas. Our young people are energised, equipped with new skills in golf and inspired to tackle cultural and sporting challenges, and the immeasurable community spirit that residents across Perth and Kinross displayed during The Ryder Cup has only strengthened since.

“97% of those surveyed for the report remember the warm welcome they received at Gleneagles, which is testament to the world-class tourism offering within Perth and Kinross. The tourism industry is essential to our local economy and it is significant for businesses here that The Ryder Cup generated £22 million spend in Perth and Kinross alone.

“Perth & Kinross Council worked tirelessly with Ryder Cup Europe, the Scottish Government, VisitScotland, EventScotland and Gleneagles, as well as Transport Scotland and Police Scotland, to ensure this major event ran seamlessly while Perth and Kinross was in the global spotlight. To see the superb results of this effort reflected in today’s report is very welcome indeed.”

The study by the Sport Industry Research Centre is the most comprehensive ever undertaken at The Ryder Cup and involved more than 9,000 survey responses from spectators.

Aside from those outlined in the economic benefits study, there is a whole host of further legacy benefits to Scotland from hosting The 2014 Ryder Cup.