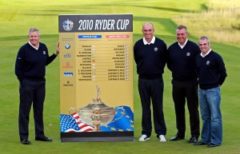 Ryder Cup Europe has launched a vigorous campaign to protect companies and the general public from being duped by pirate operators seeking to gain from The 2010 Ryder Cup at The Celtic Manor Resort, City of Newport, Wales, on 1-3 October.

SMG Worldwide and THG Sports, part of the Marcus Evans Group whose employees were arrested in South Africa over allegations of ticket touting, are offering so called “Hospitality Packages” which in reality are located in a hotel five miles from the venue.

Richard Hills, the European Ryder Cup Director, said: “Make no mistake, customers will feel that this is misleading at best. Two global “Brands” have contacted us in the past two weeks after booking with SMG Worldwide and THG Sports. Both were horrified to hear that they had booked unofficial and off-site hospitality and that as tickets cannot be transferred they might not receive any valid tickets for the Ryder Cup from the ticket supplier being used by SMG/THG.

“Luckily they were able to re-book with Ryder Cup Europe – the ONLY official way to book – but we are determined other companies are not similarly trapped because the consequences are dire.

“There are a number of other pirate operators who claim they have genuine tickets, which simply is not the case. Ryder Cup have a record of every single ticket purchased and all tickets are non-transferable. They may also claim that they will apply for tickets on your behalf, but as all tickets will have photo ID this time around, this also is a fraudulent claim.

“Pirate operators also claim they are running shuttles to the course, which is impossible. Throughout the week we have a series of road closures and restrictions that only allow shuttles from Ryder Cup Travel Services, the official provider of transport to the event, through the security cordon around the site.

“The last thing we want to do is to disappoint companies, their clients and true fans by turning them away. But, these companies leave us no option, and make no mistake, we will turn people away if they have invalid tickets. This is THE warning and there will be no exceptions. Anyone who believes they may have been duped should contact us now.

“Please don’t be fooled, some unscrupulous companies will take your money, and leave you disappointed, please don’t end up being a victim and missing The 2010 Ryder Cup at Celtic Manor. Don’t disappoint the people of Wales – they deserve better and they are going to be great hosts.”

Ryder Cup Europe has a limited number of hospitality opportunities – details at www.rydercuphospitality.com.