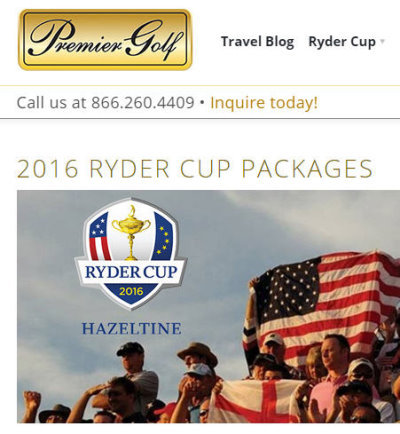 Sending more than 25,000 fans to golf’s greatest event since 1991, Premier Golf has been a licensed PGA of America partner for 25 years and is introducing Ryder Cup packages to the European market for the first time.

“The 2016 matches mark Premier Golf’s 13th consecutive Ryder Cup,” said Premier Golf President Jim Ward. “We provide fans the thrill of a lifetime and next year we fully expect another electric atmosphere at one of America’s most esteemed golf clubs.”

Starting at $2,895 per person (double occupancy), all packages include four-nights’ accommodation at a choice of seven area hotels, welcome reception, a Ryder Cup gift, daily breakfast, tickets for all four competition days and round-trip transportation to and from Hazeltine.

Premier Golf LLC is a division of Travel Incorporated headquartered in Duluth, Georgia. The company has been licensed by the PGA of America since 1988 and manages several of the PGA’s travel requirements. Since 1991, the company has been the only licensed source by the PGA for official Ryder Cup travel packages. Premier Golf is also one of America’s largest and most respected golf tour operators and has offices in Ireland and Scotland,