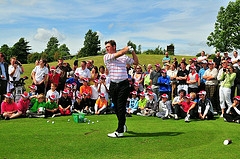 World Number One golfer Lee Westwood is to open his first overseas junior golf academy next summer at the five-star La Manga Club resort in Spain.

La Manga Club is already a very popular venue for families and the new Westwood Academy will add significant appeal for parents whose children want to learn what it takes to become the world’s finest golfer.

The academy operates between 1-5 and 8-12 August and children will take part in a dedicated instructional programme – designed by Westwood – covering all aspects of the game with prizes and gifts for all attendees. The academies will run for two hours per day and will be open to boys and girls in two different age groups – seven to 11 years and 12-16 years.

The new venture has been set up in conjunction with Activate Sport, an organisation which provides quality sport and activity instruction to boys and girls across the UK.

Commenting on the announcement, Westwood said: “I am delighted to be working with La Manga Club on my first academy outside of the UK.

“I hope that the principles that have helped me to rise to the top of the game will be a source of great benefit and encouragement to young players both on and off the golf course.”

La Manga Club is the region of Murcia’s candidate to bring the 2015 Solheim Cup to Spain. The resort has long been a staunch supporter of women’s golf. It is currently the official overseas resort partner of the English Women’s Golf Association and in the second year of a three-year agreement to host the Ladies European Tour (LET) Qualifying School. La Manga Club is also the venue for the Ladies Murcia Open, an LET Access Series event, and regularly hosts top women’s amateur events and teams.