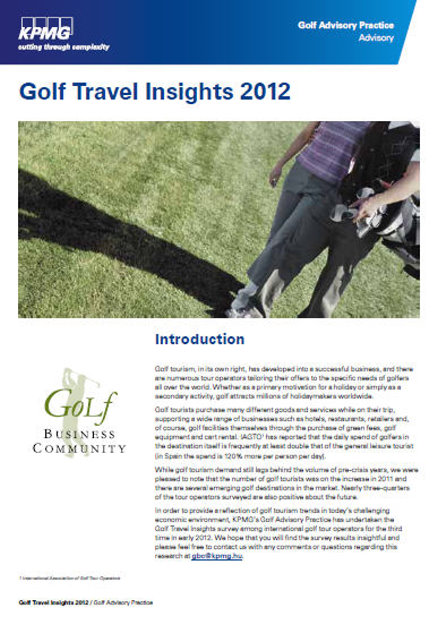 According to the Golf Travel Insights report, 60% of golf tour operators experienced an increase in the number of golf breaks booked in 2011, compared to 38% in 2010.

Similarly, just 12% of tour operators reported a decrease in bookings in 2011 compared to 54% the year before.

The survey, published by KPMG’s Golf Advisory Practice, included the feedback of 90 golf tour operators in 35 countries, the majority of which are based in Europe. The results are seen as an indicator of the golf travel industry’s performance and outlook.

However, Spain and Portugal saw an average price drop of 10-20% for golf holiday packages in 2011, while destinations inSouth East Asia increased prices by 30-50%.

Golfers from the USA and Canada, the UK, Scandinavia (predominantly Sweden) and Germany remain the biggest golf travellers. KPMG also found that golfers spend significantly more on a holiday than regular leisure tourists, typically €600-900 on a four to seven-night golf break. More than a third of these breaks (35%) are group bookings of 8-12 people.

Andrea Sartori, head of KPMG’s Golf Advisory Practice in EMA, said: “Our survey shows there is price sensitivity in the market and the popular destinations ofSpainandPortugalhave had to reduce their prices to maintain competitiveness.

“The quality of the golf courses is the most important factor for a consumer when choosing a destination, but the package price is now almost equally important.”

Andrea Sartori added: “The outlook among golf tour operators is generally positive, with nearly three-quarters of those surveyed anticipating growth in the coming year.”

For more information, and to download the report, visit: www.golfbusinesscommunity.com