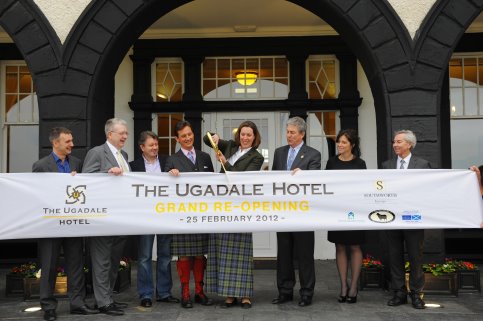 The Village at Machrihanish Dunes has officially re-opened the historic Ugadale Hotel to great pomp and circumstance! With excitement in the air Their Graces, the Duke and Duchess of Argyll, along with David Southworth, President and CEO of Southworth Development LLC; Michael Russell, MSP for Argyll and Bute and Willie Roe, Chairman of Highland and Islands Enterprises opened the doors of the famed hotel with an official ribbon-cutting surrounded by invited guests and well-wishers. The crowd cheered and the Machrihanish Dunes Pipe Band played as guests were escorted into the new hotel for the first time.

The following day The Ugadale Hotel hosted an Open House welcoming over 1,300 visitors from the local community. Guests were treated to a tour of the hotel’s suites and rooms, the Kintyre Club Restaurant, fitness centre and spa facilities.  For many it was a chance to witness the results of a building that long stood empty and dilapidated but for a select few it was a step back into history with many of the guests reminiscing of special occasions once celebrated at the hotel.

“The Ugadale Hotel in Machrihanish is a special place for the people of Kintyre,” said David Southworth, President and CEO of Southworth Development LLC. “We are thrilled with the reception we received during the opening festivities and look forward to celebrating the return of this iconic, turn-of-the-century hotel, which will bring a new standard of accommodation to the region.”

Once regarded as the pinnacle of luxury accommodation in the west of Scotlandwhen it was alternately known as The Ugadale Arms Hotel and The Machrihanish Hotel, The Ugadale Hotel  is again welcoming visitors following a year of careful restoration work.  It is the first time the hotel has welcomed guests in more than 30 years. The new Ugadale Hotel offers 22 luxurious guest 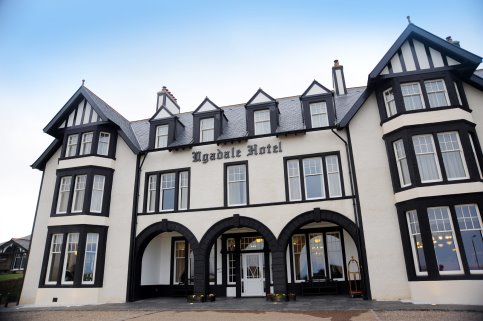 rooms and suites, many overlooking the Atlantic and famed Machrihanish Golf Club. It features a restaurant and bar called The Kintyre Club, the full-service Serenity Spa and a Fitness Centre.

A Major Investment for Kintyre

In addition to bringing valuable jobs to the area, Southworth has invested over £ 19.3 Million ($30 Million US) to the overall project, along with grants from Highlands and Islands Enterprise (HIE) totalling £2.2million, including £886,000 from the European Regional Development Fund (ERDF) funding support.

In addition, HIE provided a grant totalling £ 509,606 for the development of the Machrihanish Dunes Golf Course which opened in 2009. A special grant was also awarded to the Royal Hotel by the Scottish Ministers, through Historic Scotland under the Historic Environment Regeneration Fund and the Campbeltown Town Centre Regeneration Project (Argyll & Bute Council).

Douglas Cowan, Highlands & Islands Enterprise Area Manager for Argyll & the Islands, added: “The opening of the fully restored Ugadale Hotel marks the completion of the latest phase of investment by Southworth, building on the success of the internationally acclaimed Machrihanish Dunes golf course. The development is playing a key role in repositioning the local economy providing a high quality tourism product to attract new, high spending visitors from around the world.

“HIE approved £2.2 million, including £886,000 from the European Regional Development Fund, to support the redevelopment of the Ugadale and Royal hotels as part of our commitment to the revival of the Kintyre economy, bringing more than £3million to the economy annually. The commitment and investment by Southworth Europe is having a major impact on both the economy and confidence on the Kintyre peninsula and the opening of the Ugadale hotel marks a significant step forward for the area.”

The Royal Hotel, the second historic hotel that’s currently being restored by Southworth, will offer in-town accommodations for guests of the Village at Machrihanish Dunes at its location overlookingCampbeltownHarbour. It will feature 23 elegant rooms, a gourmet restaurant, and a lively waterfront pub. The Royal Hotel is scheduled to open early May 2012.

Machrihanish Dunes Golf Club and the luxury accommodations in both Machrihanish and Campbeltown, Scotlandare managed by Southworth Europe Limited. Southworth Europe Limited is an affiliate of Southworth Development LLC, a privately held company based in Newton, Massachusetts, specializing in the development of residential resort & hospitality branded real estate communities. Through its affiliated companies, Southworth Development is extremely active in the international golf industry.