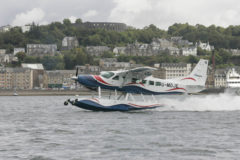 The world’s first airline dedicated to golfers will take off in April with a range of routes connecting some of Scotland and Ireland’s most spectacular courses.

Golf Links Express, an offshoot of the award winning Loch Lomond Seaplanes, is due to ferry golfers on a number of routes between Prestwick, Lough Erne golf resort in Ireland, Machrihanish Dunes in Kintyre, Loch Lomond and Machrie on the island of Islay.

The new service will open up some of the finest and most remote courses to time- pressed enthusiasts from around the world and will operate out of Prestwick Airport providing instant links to remote course for thousands of foreign golfers who travel to Ayrshire every year.

Hours of travelling between some of the country’s most spectacular golf destinations will be reduced to minutes by the amphibious on-demand service.

“We’ve already had bookings from golfers as far a field as the US, Scandinavia and Ireland,” said David West, founder of both Loch Lomond Seaplanes and Golf Links Express.

“Prestwick International Airport already welcomes tens of thousands of golfers every year but many rarely venture further than Ayrshire because of the travel time by road. Now they can access some of the best links courses in the world within minutes. 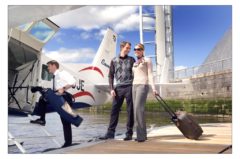 “Golf Links Express will be able to carry up to 10 golfers and their clubs from Prestwick to Islay in around 25 minutes, on to Machrihanish in 15 minutes then to Loch Lomond in another 25 minutes. That’s three fantastic locations across Scotland that would usually take a whole day’s travel to reach by car,” said West.

It is estimated that golf tourism is worth at least £300 million a year to the Scottish economy as golfers spend, on average, more than other tourists. For every £1 spent on a green fee a further £5 is spent elsewhere in the economy.

“This is a very exciting development connecting Irish and Scottish golf which will give players from a round the world the chance to experience the best that both countries have to offer,” said Jim Treacy, owner of Lough Erne Golf Resort.

The Golf Links Express is the only air service dedicated primarily to golfers although the flights will be open to anyone.

According to Brian Keating, founder of Machrihanish Dunes golf course and The Ayrshire, which is being built on the links near Irvine Bay, the airline opens up tremendous possibilities for changing golf tourism in Scotland.

“The Golf Links Express is just what Scotland needs. There are more than a quarter of a million golfers arriving in Ayrshire every year and this airline will enable them to experience more of what Scottish golf has to offer and spread the value of those visitors throughout the economy.

“Scotland and Ireland have some of the best golf courses in the world but traditionally people have been unable to reach them because of the traveling time. Now they can play somewhere like Machrihanish in the morning and be on the greens at Lough Erne in Ireland within 25 minutes.”

All Golf Links Express contact details etc can be found at www.facebook.com/golflinksexpress