With the recent announcement that the Irish Open will return to Royal County Down in 2015, Royal Portrush’s inclusion on the Open Championship rota and potential 2019 call, and the recent announcement of a €45 million investment in Doonbeg by Donald Trump a fantastic platform has been created to attract increasing numbers of golf tourists to Irish shores. Speak to any club that attracts significant visitor numbers and they will tell you just how vital a revenue stream they are to the balance sheet. Golf tourism is an incredibly lucrative form of tourism that already makes a significant annual contribution to the Irish economy but just how valuable? With over 50 million golf tourists travelling the world to play on some of the estimated 32,000 courses each year to date only limited research has ever been carried out in Ireland to quantify the impact of golf tourism on both the game and the wider economy, until now.

Ireland has approximately 58 of the world’s 246 links golf courses, almost a quarter of the entire global total. Whilst this provides a focus to this element of its tourism product, recent findings suggest that it’s true potential is far from fully realised and has been perhaps underplayed in recent recessionary times when even the best-known links on the island were affected. A unique piece of research has recently been conducted which is the first significant examination of the golf tour operating sector and it’s impact specifically on the links golf courses of Ireland. Undertaken by Tom Cotter (The Cotter Collection) with input from Dr Peter Bolan (University of Ulster), it illustrates the significant economic impact of this sector on links golf and in turn its inter-dependency with, and impact on, the wider economy.

The contribution of golf tour operators

It was widely believed by the industry that golf tour operators are responsible for bringing both a significant number of golf tourists to Ireland annually, and that those activities create significant economic benefits. Furthermore, it was also widely believed that the majority of overseas golf tourists have an overarching desire to play only links golf, yet all previous studies conducted have not separated links from parkland in economic terms. For the first time this research addresses these crucially related aspects and most importantly, puts a value on the golf tour operator contribution. Detailed information was invited from76 golf tour operators located in 19 different countries around the world. A further 22 in-depth interviews to delve deeper into the core issues pertinent to the research were also conducted. In the most comprehensive study of its kind ever, interviews were undertaken with secretary managers and PGA Professionals from across the island, with national and international golf tour operator associations, regional marketing bodies, national and international tourist boards, hoteliers, restaurateurs, caddie masters, transport providers and golf course architects.

Selected findings from the research reveal that golf tour operators generate on average 66.26% of the business for links golf courses in Ireland annually. However, only a small percentage of these clubs actually generate the vast majority of golf visitor spend here. Based on Fáilte Ireland (the National Tourism Authority) figures that in the Irish Republic, in 2012, there were 163,000 overseas golfers generating €202m (£161m) for the economy, this research can confidently attribute at least 37.62% of that figure directly to “links golf”. In other words, 12.6% of the golf clubs in the Republic of Ireland (42 out of 332) produce almost half of all international golf visitor incomes. However even more stark, is that only 5 out of the 98 Golfing Union of Ireland registered clubs in Northern Ireland (just under 5% of NI golf clubs) produce a vast 64.23% of their estimated total revenues based on the suppositions by DETI Minister Arlene Foster that golf tourism is worth between £10-£12m per annum.

Over-reliance upon visitors from North America 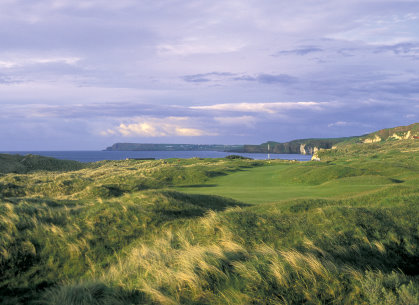 The overwhelming majority of overseas golf visitors to links courses (67.82%) are from the USA and with a further 19.09% from Canada. With a stark 86% of visitors coming from North America, this over-reliance can have significant implications for wider tourism, in particular the accommodation and hospitality sectors. The majority of visitors (80.62%) are male, with the average group size being just over 7people (7.16 persons). They spend on average 7.25 nights on their golf trip in Ireland playing just over six courses (6.14) and a slightly higher number of rounds (6.61). Tour operators described 75% of their clients as golfing ‘purists’, 16% as ’golf and activity seekers’ and the remainder as ‘corporate clients’. Almost two thirds of visitors (60.91%) use some form of escorted transport whilst in Ireland with the remainder taking a self-drive option.

The average price that visitors pay a golf tour operator for this experience is almost $4,000 per person (£2,350). The average ‘tour operator generated’ green fee figure returned by the sample clubs in the research was €91.74 (£72.65) whilst the average discretionary spend per tour operator visiting golfer, per club, was €181.26 (£143.26) (pro shop spend, caddie services and food & beverage). In other words, golf tour operator visitors are spending approximately €1,314 (£1,040) per person over the course of their 7 night trip on discretionary items alone (excluding accommodation, green fees etc.), significantly higher than previously thought.

Detailed revenue data was provided by seventeen Irish links golf clubs for the research and from these the following findings were extrapolated: –

Approximately 248,113 international visitor rounds of golf are played on links golf courses annually, representing 37,536 actually visitors. These trips create €22.7m (£18m) in green fee revenue and €45m (£35.6m) in discretionary spend into the economy. Furthermore, using an average room rate across the island in conjunction with length of stay data revealed by the research, we estimate that golf tour operator clients to only links clubs generate a further €33m (£26.1) for the accommodation sector, totaling a combined €101m (£80m) contribution. Based on the physical distribution of the clubs, this breaks down as €90.2m (£71.4m) in the Republic and €10.8m (£8.5m) in Northern Ireland.

The future for golf tourism in Ireland is positive

Some further key findings and recommendations from the research include:

The future for golf tourism in Ireland is positive, particularly if the aspects mentioned are addressed effectively. The research calls for a detailed, inclusive and comprehensive golf tourism strategy across this island that can make a difference and leverage maximum potential.

This article deals with a mere selection of the recent findings from the research so for further details on the myriad of related issues to golf tourism development and its potential for your club or property, feel free to contact Tom and Peter via tom@cottercollection.com

Tom Cotter is the owner of “The Cotter Collection”, a bespoke representation, consultancy and sales generation company that focuses on creating business opportunities for its clients within the international golf tour operator sector.

Dr Peter Bolan is Director for International Travel and Tourism Management in the Ulster Business School of the University of Ulster. His research interests and specialisms include golf, film and digital tourism.