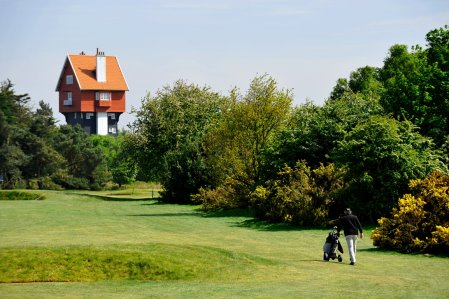 One of the worst kept secrets in the UK golf industry was confirmed earlier this month when this summer was officially confirmed as the wettest on record in England and Wales for 100-years.

New figures released by MeteoGroup, the weather division of the Press Association, showed that 14.25 in (362 mm) of rain fell in June, July and August, making it the wettest summer since 1912.

In response to the negative news, a golf hotel in one of the driest parts of Britain has issued an open invitation for golfers to come and dry out at its James Braid designed seaside course, which enjoys one of the lowest rates of rainfall in the British Isles.

Thorpeness Hotel and Golf Club in Suffolk, Eastern England, has only closed for an average of three days per year over the past four years, despite winters blighted by ice and snow and unusually mild wet summers, and refuses to allow 2012 to be washed out for golfers.

Christopher Oldrey, golf operations manager and PGA Professional at Thorpeness Hotel and Golf Club, said: “We know that there are a lot of fed up golfers in the UK right now who have had golfing trips and club competitions cancelled due to this summer’s never ending downpours.

“Thorpeness is often described as the ‘best-kept secret’ in Suffolk Golf, because we have very low rainfall and hardly ever close our course, plus we are built on sandy soil that drains quickly when it does rain.

“We want to get the word out there that we are as dry as anywhere in Britain, in great condition and open for business should golfers wish to make the most of what’s left of light nights and warmer days.”

The 18-hole par 69 course is situated on a low lying flat coastal plain in an area of outstanding natural beauty that enjoys a warm, mild and dry micro climate.

Suffolk’s annual rainfall is generally as little as one fifth of that in the West Country and only half that of the South Coast. The county has an excellent sunshine record when compared to the rest of the UK enjoying around two hours more sunshine per week than the national average.

Thorpeness offers a range of great value golf breaks that also combine cultural activity, distinctive local food and drink, and are available throughout the year.

“Winter is one of our busiest seasons and it’s because our course stays so playable year round and when courses start closing in England’s Southern Counties, it’s not far to travel to Suffolk for a day’s golf and great hospitality,” added Mr. Oldrey.

The Braid designed course winds its way through an area of pine firs, gorse and heather and is overlooked by Suffolk’s famous “House in the Clouds.”

It is part of the Thorpeness Village– a fantasy holiday destination created in the 1920’s by a wealthy Scottish barrister – and which has the Meare, a manmade boating lake, which inspired author J.M Barrie when he wrote the story of Peter Pan.

For more about Thorpeness: www.thorpeness.co.uk