Construction under way at Scores Hotel 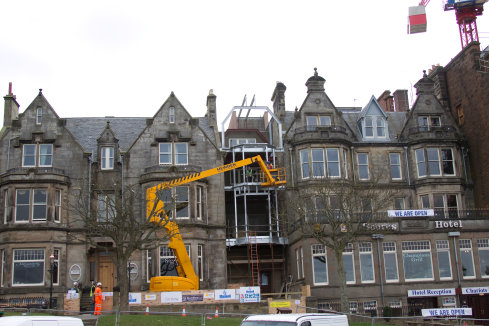 Six new junior suites are being constructed, with three being housed in the gap between the existing properties. As Eric Brown general manager of the hotel says, “We are delighted with the progress being made so far and it seems fitting to bring these two wonderful Victorian buildings together “.

The outer construction is in dressed ashlar stone to match the existing buildings either side and two of the suites will have bay windows, and the third affording a balcony with stunning views.

In addition, the conversion of the lower ground floor of  Seaton House is nearing completion and will provide additional family accommodation, as each of the spacious suites can sleep up to 4 people, with 2 of them having small kitchens. The “Seaton House Suites” as they will be known, will add significantly to the accommodation flexibility  for guests at the hotel.

U.S.based Mr David Mann, who owns the Scores Hotel and is often resident  for the summer months each year said: “It has taken a lot of careful planning and expertise to get this stage of the hotel’s development underway and my family are extremely grateful to everybody involved and we are looking forward to its completion in early June.”

For the future, planning permission has also been granted for another major development  with an extra 30 rooms to be built at the rear of the hotel in readiness for the next Open Championship at St Andrews in 2015.

Eric Brown added “These buildings are steeped in history and it’s great to know that St Andrews is going to get the best of both worlds at the BEST WESTERN Scores Hotel for the future.”