With the Portugease Masters taking place this week in Vilamoura, Clubs to Hire’s flagship store at Faro has seen strong trade since the opening of its new shop in June 2017. The airport at Faro has recently opened a new terminal and this year will have one of its busiest in living memory. 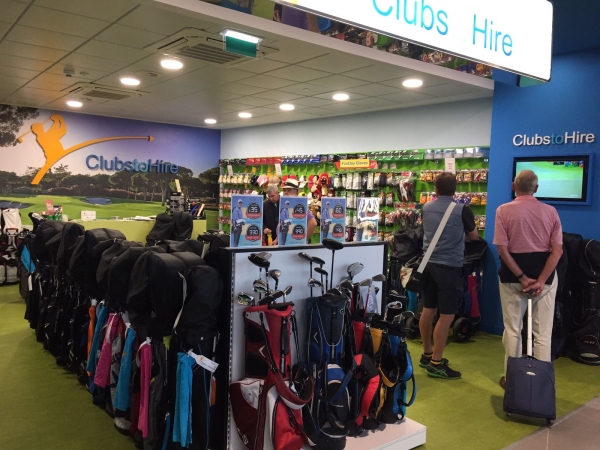 This year over 8.5 million international travellers will pass through Faro Airport and almost 10% of them are travelling for golf.

Clubs to Hire has invested significantly in the new airport and has geared up to meet demand during the busy Autumn season. The new shop at Faro opened in June and the feedback has been very positive.

“We are delighted with the new shop at Faro Airport as the airport has seen record numbers since the opening of the new terminal in June. When we opened at Faro in 2010 the airport was servicing 3.5 million passengers per annum. This year they will handle over 8 million passengers which is living proof of the attractions of the Algarve.” said Chief Executive Tony Judge, who founded the company with Ulster businessman Gerry McKernan in 2010.

“The new store is part of a major investment by us as we recently opened new retail outlets at Alicante and Palma (Majorca) Airport. We have ambitious plans for all our shops as we want to make golf travel as simple and hassle free as possible,” he continued.

The company which handles up to 300,000 annual visits from golfers to their website and 75,000 requests for rental clubs at 20 locations around the world, including popular golfing regions in the United States, South Africa and five countries across the Mediterranean and offer the latest clubs on the market from between £32 and £55 per week.

Golfers can go online to pre-select sets of the latest clubs on the market and pick their putter of choice on arrival, which are then either collected from shops in airport terminal buildings, or delivered direct to hotels or golf courses for even greater convenience.