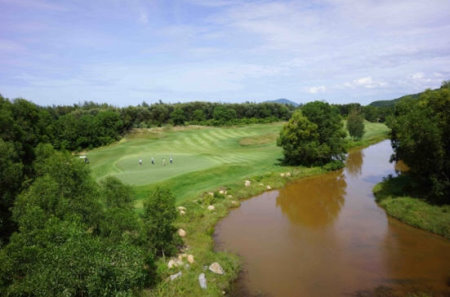 Vietnam’s Central Coast has been re-affirmed as the country’s top golf tourism destination and among Asia’s elite at separate awards presentations in the past week.

Each of the three world-class courses on the Central Coast – Danang Golf Club, Montgomerie Links and Laguna Lang Co – have been acknowledged.

Danang GC was named for the second time as Vietnam’s leading course at the biennial Vietnam Golf Association awards in Hanoi last week, with Montgomerie Links awarded the title of best championship course.

Laguna Lang Co, opened in March by its designer Sir Nick Faldo, was this week voted best new course in Asia Pacific at the Asia Pacific Golf Summit in Jakarta, with Danang GC and Montgomerie Links judged best and second best course in the country.

Mark Siegel, the principal of Golfasian Vietnam and chairman of Golf CoastVietnam, a co-operative marketing group that represents the three golf courses and leading hotels and resorts, said: “These awards show that Vietnam’s CentralCoast is the hottest golf destination in Asia. Everyone who comes to the area leaves with a sense they have experienced courses, playing conditions, culture, food and history as good as anywhere in Asia or elsewhere.”

The CentralCoast is based on Vietnam’s fourth largest city, Danang, which is serviced by direct international flights from Singapore, Hong Kong, Seoul and cities in China, as well as all major Vietnamese cities. It is a one-hour flight from both Hanoi and Ho Chi Minh City. Foreign golfers from Asia, Australia and western Europe have helped the CentralCoast’s double-digit tourism growth for each of the past several years.

As well as golf, the region’s three UNESCO World Heritage sites – the Hoi An ancient trading port, the imperial walled city at Hue and the My Son cultural sanctuary – are among the region’s tourism attractions.