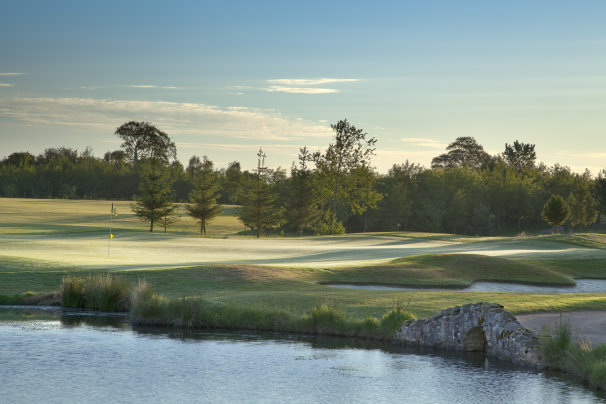 The record-breaking March temperatures have helped Scotland’s best country house hotel start the season on a high. The unseasonably mild conditions have enabled greenkeeping staff at Meldrum House Country Hotel to complete a series of major on-course improvements that will ensure some of the best playing conditions at the Northern Open host venue.

The most apparent change is the completely redesigned first tee which required the removal of 600 tonnes of topsoil and large granite stones weighing up to three tonnes to be positioned to create a new landscaped area. More subtle but of equal importance was the three miles of drainage introduced to nine fairways as part of a £60,000 investment.

Crucially, the warm winter has permitted the extensive work to be carried out alongside other smaller projects such as the reshaping of the run-off gulley to the left of the sixth green. “The weather has been exceptional. We’ve done three winters’ work in one,” noted Kenneth Harper, golf course and estate grounds manager at the four-star resort. “This winter has certainly made up for the work we missed over the last two years because of snow cover. So far, the daytime temperatures have been amazing, meaning that we are about a month ahead of where we would be normally. It has been a fairly major operation that has kept everyone busy over the winter.”

Ironically, the weather has been so good that Meldrum’s greenkeeping team has had to water newly laid turf to keep it alive while it beds down. The pay-off, Harper explained, will come when the rains do come. “The idea behind the work is to ensure the course is able to deal with excessive rainfall,” he explained. “The last two summers have been very poor, and although we have generally managed to stay open, we would like to handle the rain better. If we do get rain, we should be able to guarantee that we will stay open no matter how wet it gets.”

Meldrum House Country Hotel, which was named Scotland’s best country house hotel by leading tourism trade body Golf Tourism Scotland and collected a clutch of plaques at the 2011 Scottish Hotel Awards, will host The Northern Open for the third year running in August. “It has been a cracking year for Meldrum which has been built on the hard work of all the staff at the resort,” noted Andy Burgess, head of operations and development. “As ever, we continue to improve what we do and the work taking shape on the course is very much part of that. I am sure this season will see some of the best playing conditions ever at Meldrum, which is fantastic.”