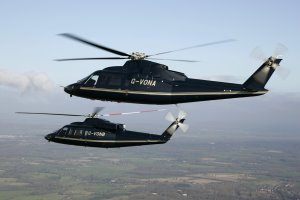 With 55,000 spectators expected at Celtic Manor every day, traffic managers in Newport are gearing up to tackle increased congestion and warn of delays in the run up to the start of the Ryder Cup Match.

Drivers have already been warned to expect heavier traffic and allow extra time for any journeys between 0500 and 1000 BST every day until Sunday.

PremiAir, the UK’s leading executive helicopter charter company and the supplier of helicopter services to the 2010 Ryder Cup, is now fully booked on its charter fleet for helicopter transfers to and from the event.

PremiAir is operating daily helicopter transfers from airports throughout the UK and Ireland with the four-seat Eurocopter AS355 Twin Squirrel and the Sikorsky S76, which seats up to eight passengers.

“Given the option of more than two and a half hours driving from London to South Wales or a 50 minute helicopter flight, enjoying stunning aerial views of the Ryder Cup golf course along the way, our clients have clearly elected to take the scenic route,” said Charlie Hounslow, PremiAir’s Charter Services Team Leader.

“Our Ryder Cup helicopter shuttle packages have been on sale since February and our own charter fleet is now fully booked. We are providing transfers direct to the Celtic Manor from starting points including Bath, Cardiff, north Wales and the brand new London Heliport.”

Helicopter transfers to the Celtic Manor from the Bath and Bristol area take approximately 10 minutes, with prices starting from £370 per person including VAT.

Alternatively visitors can be transferred to Bristol or Cardiff by private jet from a variety of locations throughout the UK, or travel by helicopter from the all new London Heliport in Battersea in a journey time of just 50 minutes. Prices from The London Heliport start from £730 per person including VAT.

Established 30 years ago, PremiAir is the UK’s largest Executive Helicopter Charter and Management company. It has bases at Denham, Blackbushe, Oxford, London Biggin Hill and Farnborough Airports plus The London Heliport. www.premiair.co.uk