Before the action in France even got underway, the members of Hillside GC of Zimbabwe retained the Zimbabwe Ryder Cup in the second international match in this little-known distant cousin of the real event, writes Ross Biddiscombe 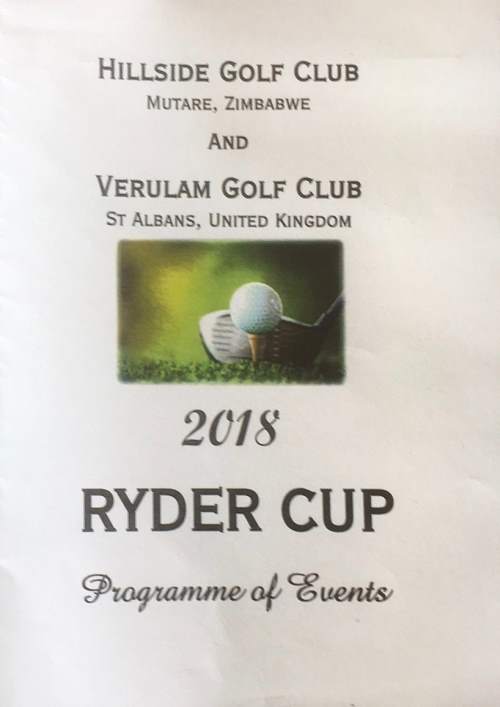 The beaten international team from Verulam GC in Hertfordshire, England (the home club of Samuel Ryder himself) made a brave effort, but the fact that the British team initially lost most of their luggage and golf clubs was too much of a disadvantage.

The match score of 20½ to 7½ was irrelevant to the two teams who staged the match in friendship rather than for glory. There were actually three trophies on offer: Samuel Ryder’s shooting stick for golfer of the tournament was won by Neville Custance, Verulam’s captain; the Ryder 50 trophy was awarded to Verulam for their efforts; and the Zimbabwe Ryder Cup itself was retained by Hillside, but a return match in the UK is now planned in 2020.

Recent Verulam captain John Rodford spent 18 months putting the trip together to play members at Hillside which is situated in the Eastern Districts of Zimbabwe, about a four-hour drive from the capital Harare.

It was the second time an international team had gathered in Zimbabwe to play for the small silver alternative Ryder Cup – a team based around members from Hampstead GC in London made the trip in 2014, the first time the trophy had been contested by golfers travelling from outside Africa.

Prior to 2014, the sterling silver Zimbabwe Ryder Cup had an equally interesting history: it was played for between local golfers in many formats for many years; attracted sponsorship from a large distillery; was contested with South African players; and even went missing for a few years during the land reform invasions of the early 2000s.

The connection between Verulam and the Ryder Cup is that the Hertfordshire club was Samuel Ryder’s club for almost 30 years. He was captain there three times, in 1912, 1926 and finally in 1927, the year of the first actual Ryder Cup.

Verulam members were visiting the place where Samuel Ryder’s daughter Marjorie settled back in the 1930s with her farmer/husband, a time when the country was still called Rhodesia. Ryder discovered that the African golf community needed a trophy to play for, so in 1933 (six years after the more famous Ryder Cup began) he sent his daughter a silver cup and told her: “Call it the Ryder Cup!” And so, another Ryder Cup was born.

Both sides in this year’s Zimbabwe Ryder Cup were made up of enthusiastic members rather than the lowest handicappers of each club and the match was seen very much as a ‘friendly’.

Despite a few travel horror stories, Verulam’s John Rodford said the trip was a huge success. “The golf was played on a very firm course which put a premium on skills around the green. Big hitters definitely had an advantage, with golf balls running for miles provided they were hit straight,” he commented.

Details of the Zimbabwe Ryder Cup and other golf tales of the unexpected appear in Ross Biddiscombe’s acclaimed book Ryder Cup Revealed which is available at amazon.co.uk via this hotlink: https://tinyurl.com/y9w75whd