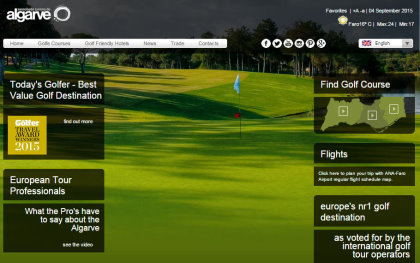 The Algarve has revealed record golf participation levels for the first and second quarters of 2015 with more than half-a-million rounds played along its famous coastline.

The destination’s enduring allure is particularly illustrated in the second quarter, which accounted for 70 per cent of the total increase in rounds played in the first half of the year.

Almost 35,000 more rounds were played than in the same period in 2014 – equivalent to an additional 190 rounds per day – with visiting golfers benefitting from the mild climate, strong European flight connections and great value for money, particularly with Sterling against the Euro.

Well on its way to surpassing one-million rounds for the year, the Algarve’s success can also be attributed to its execution of an integrated 2015 PR strategy to boost its profile, and the launch of new social media platforms in late 2014, which have already resulted in more than 11,000 followers on its Facebook page and engagement with 1.2 million consumers.

Maria Manuel Delgado e Silva, ATA golf product manager, said: “We are delighted and filled with so much pride that people are continuing to choose our golf-rich region and experience our distinct offering.

“We strive to provide the very best in hospitality, accommodation and golf venues, and our golf and hospitality partners will continue working hard at building relationships of confidence and trust with golf consumers across Europe.”

The picturesque region also looks forward to hosting Europe’s disabled golf elite in the second European Disabled Golf Association (EDGA) Algarve Open 2015 – where the winner of the 2015 EDGA Premier Series Order of Merit will be crowned – from 17-22 November.

The Algarve’s sun-drenched climate boasts more than 300 days of sunshine per year, extending the golf season by several months and driving players from all over the world to the region. It will be celebrating its 50th anniversary as a golf destination in 2016.