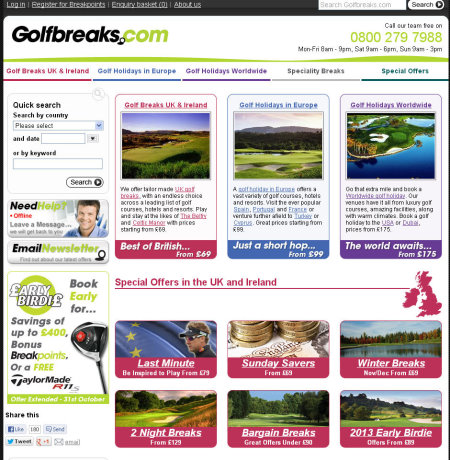 With a number of victorious members of the European Ryder Cup team – including captain Jose Maria Olazabal and the man whose point secured the trophy, Martin Kaymer – teeing up at this week’s Portugal Masters, the Algarve has never been more popular as a golfing destination.

This beautiful area of southern Portugalremains a firm favourite with customers of Golfbreaks.com – Europe’s largest golf tour operator – thanks in no small part to the dozens of superb courses and resorts, the glorious year-round climate and the number of daily flights from a variety ofUK airports.

Such is the popularity of the region with UK golfers that so far this year, 15% more golfers have travelled to the region than in 2011, while bookings for 2013 are up almost 25%, confirming the Algarve’s enduring appeal for the travelling golfer.

Venues such as the legendary Penina – Sir Henry Cotton’s iconic layout that started the golf boom – and the much-loved San Lorenzo, which is ranked in the Top 30 inEurope, are just two highlights. The five courses of the Pestana Group – including Vila Sol and Pinta – are also hugely popular, so too the Vilamoura courses of the Oceanico group.

Along with the famous Old, the jewel in the Oceanico crown is the stunning Arnold Palmer-designed Victoria layout, which this week hosts the players of the European Tour for the Portugal Masters. The tournament is one of the most popular stops on the European Tour circuit, with players enjoying both the challenge of the Victoria course and the off-course attractions of the Algarve.

But it’s not just around the central Vilamoura area – plenty of superb alternatives are available including to the East, the lovely little town of Tavira, with a number of excellent courses close by. The Western areas of Lagos and Alvor, meanwhile, are also gaining ground, thanks largely to the massive remodelling at Onyria Palmares, which can now lay claim to be Portugal’s No.1.

Golfbreaks.com has a number of spectacular Winter Sun offers including:

And thanks to the Algarve Tourism Association – the region’s promotional body – visiting golfers who arrive at Faro Airport between 22nd October and 4th November can enjoy the first round for nothing… in the form of a free beer from Super Bock, the country’s most popular tipple.