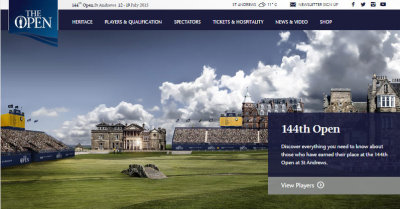 Several categories of tickets and hospitality packages for the 144th Open at St Andrews are already sold out with just under two months to go until the Championship.

Tickets for The Greenside Club overlooking the 18th green and reserved grandstand seating at the 1st and 17th holes at The Open, which is played from 16-19 July, are sold out in advance and hospitality packages for The Road Hole Restaurant and The Champions Club pavilion are fully booked as are the Private Chalets and Suites in the Hospitality Village. The hospitality programme is now 95% sold out with the remaining packages expected to sell out shortly.

The hospitality programme, which offers Open tickets combined with all day on-course hospitality, accounts for some 11,000 covers over the final practice day and four days of the Championship.

Sales of adult daily tickets are very strong. Spectators can still take advantage of early season prices until midnight on Sunday 31 May 2015. Children under-16 are admitted free to The Open when accompanied by an adult.

Michael Tate, Executive Director – Business Affairs at The R&A, said, “Demand for tickets and hospitality packages is always strong at St Andrews and the trend for buying online at early season prices continues to grow. We are very pleased with the way sales are going and of course people still have a few days to purchase tickets at early season prices.

“The Open is one of the world’s leading sporting events and the allure of the Championship is even greater when it is played at the Home of Golf.”

Large galleries are expected for the Champion Golfers’ Challenge on Wednesday 15 July when 29 of golf’s greatest players who have won The Open, including Tom Watson, Sir Nick Faldo, Tiger Woods and Rory McIlroy, will compete in a four-hole charity event with £50,000 pledged to the charity nominated by the winning team.

More than £2 million has been invested on spectator enhancements including the installation of LED scoreboards on 17 holes and free Wi-Fi access around the course, enabling spectators to use the award-winning Open app.