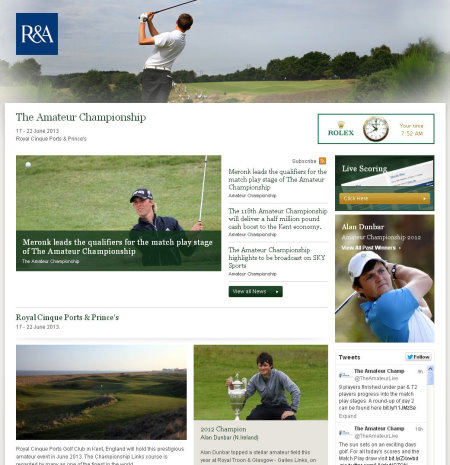 The 118th Amateur Championship is underway at Royal Cinque Ports and Prince’s with 288 competitors from 33 countries helping to deliver a half million pound cash boost to the Kent economy from the week long event.

The prize awaiting The Amateur Champion is a place in this year’s Open Championship at Muirfield and next year’s US Open at Pinehurst, North Carolina. Traditionally, an invitation is also extended to play in the following year’s Masters Tournament at Augusta.

Kent will benefit from £500,000 injected into the local economy according to an independent event impact study from SheffieldHallamUniversity’s Sport Industry Research Centre. The research reveals that almost 3,500 commercial bed nights are required to host the week-long event which brings in additional spending on food and drink, transport and through local supplier contracts. A further tourism promotion benefit will be derived from TV highlights of the final three days of the championship that will reach 150 million households across Europe, America, Asia and Oceania.

Welcoming the news Minister for Sport and Tourism Hugh Robertson said: “Hosting the 118th Amateur Championship in Kent this week will help give local businesses in the county a boost from the additional tourism trade. I wish all the competitors the best of luck, with the winner being able to test themselves against the very best golfers in the world, including our latest major winner Justin Rose, at the next Open and US Open Championships.”

Six players in the top twenty of the World Amateur Golf Ranking are teeing it up in Kent this week: Brady Watt from Australia ranked No.3 with fellow countryman Cameron Smith ranked No.14. Frenchmen, Julien Brun and Adrien Saddier are ranked No.5 and No.16 respectively and from England Nathan Kimsey is ranked No.13 and Max Orrin ranked No.20 in the world. Orrin (North Forland) leads six players from Kent in the championship that also features Jonathan Grey (HeverCastle), Michael Saunders (Dartford), Alfie Plant (Rochester and CobhamPark), Jerome Titlow (KnolePark) and Darren Timms (Mid Kent).

The first two days of The Amateur Championship is stroke play over both courses before the field is cut to 64 and ties and the match play format finds the champion over the final four days at Royal Cinque Ports.

Admission and parking is free at Royal Cinque Ports and Prince’s. Public catering is also available. Full details including the championship draw can be found at championships.randa.org and television highlights will be broadcast from Thursday, 20 June to Sunday, 23 June 2013 on Sky Sports.