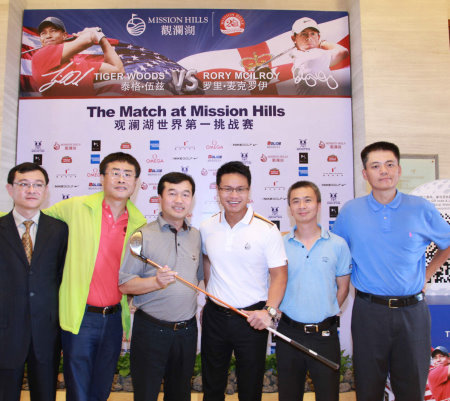 Mission HillsChina has confirmed the total amount raised in a charity auction at The Match at Mission Hills Gala Dinner, held in honour of Tiger Woods and Rory McIlroy, during which both players donated signed golf clubs.

Despite finishing one shot behind McIlroy in the match, Woods proved that he still has pulling power when it comes to charity auctions, raising a staggering RMB278,000 (approx. US$ 45,600) for his autographed driver. Meanwhile, the club that saw McIlroy emerge victorious on the Blackstone Course raised a further RMB80,000 (approx. US$ 13,100), for the exhibition match’s official charity.

Funds from the charity auction will go to the Dr. David Chu Memorial Foundation, which was established by the Mission Hills Group in memory of its late founder, Dr. David Chu, and aims to continue Dr. Chu’s spirit of kindness and charitable goodwill. The Foundation invests in initiatives such as education, science, culture, sports, orphan care, helping people with social difficulties, and providing emergency assistance in areas hit by natural disasters. It has recently donated over RMB7 million (approx.US$1,150,000) to education, sports, and disaster relief programs in Sichuan.

Ken Chu, Chairman and CEO of Mission Hills Group, said, ”I am very grateful to Tiger and Rory for their generosity and support. The funds raised through their donations will support a number of very worthy causes in China which are funded by the Foundation. My father would have been very proud to see Rory and Tiger competing against one another in The Match and this donation will ensure that his spirit remains very much alive at Mission Hills.”

Earlier in the day, a resurgent Rory McIlroy shot a six-under-par 67 to beat World Number 1 Tiger Woods by a shot on Blackstone Course to win The Match at Mission Hills, the duo’s 18-hole showdown on Hainan Island, off the south coast of China.