U.S. Kids Golf Championship to Tee Off With Record Numbers 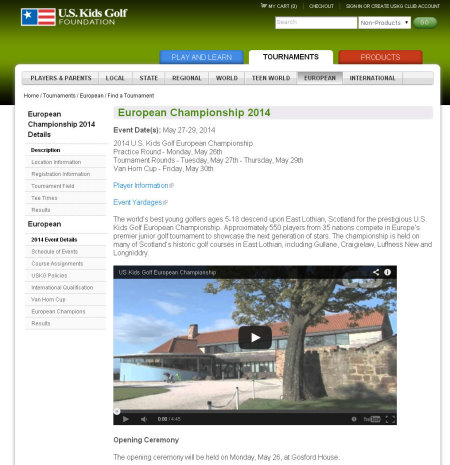 The U.S Kids Golf European Championship has continued to underline its reputation as Europe’s premier junior tournament by announcing the tournament has attracted a record number of competitors.

More than 560 young golfers have signed up for the competition – an increase of at least 50 from the 2013 event.

Competitors from across the globe – including such unusual locations as Myanmar (formerly Burma) and Nigeria, and as far away as Japan – will be travelling to Scotland to play on five historic East Lothian links courses.

The competition is organised by the U.S. Kids Golf Foundation to give children an opportunity to learn and play golf and forge new friendships, and challenge each other for the European Champion titles in various age groups.

Dan Van Horn, President and founder of U.S. Kids Golf, said: “Our ambition has been to see the European Championship grow in strength from year to year, so to see registrations hit record numbers clearly demonstrates the growing reputation and quality of the tournament.

“We’re incredibly proud of the quality competition we have built in conjunction with the superb partnerships we have formed with golf clubs in Scotland. The European Championship is now a major fixture on the calendar for the world’s best young golfers.”

Tournament Co-ordinator Alasdair Good, Head Professional at Gullane Golf Club, said: “Bursting through the 550 player number is a huge milestone for us.

“We are also pleased to see an increasing number of players come to Scotland for the first time. This provides an excellent opportunity to showcase Scottish golf to the world, particularly in such an important year for Scotland with the Ryder Cup being played in September.

“East Lothian’s historic courses always provide a stunning setting and a great challenge for all of the competitors – a big reason why this tournament has become so popular.

“Such is the strength of the platform provided by the competition that we are beginning see some of the winners from our first event go onto to bigger things on the world stage.  That is a superb endorsement of the good work the tournament has achieved.”

During the competition, the courses are modified for each age group in order to provide the same level challenge; meaning holes are progressively shorter as the age groups get younger.

The top finishers in each category will compete in the Van Horn Cup over Luffness New on May 30 – a showpiece event, modelled on the Ryder Cup, where the best Western European players are matched up against the top golfers from the rest of the world.

The top five finishers in each age and gender group also automatically receive an invitation to the U.S. Kids Golf World Championship at Pinehurst Golf Club, North Carolina, in August.

U.S. Kids Golf, LLC is based in Atlanta and manufactures equipment and related golf products designed for kids. It was created in 1997 when Founder/CEO Dan Van Horn found that his children were losing their interest in golf due to not having the proper equipment. In addition to more than 4,000 golf shops and retail locations in the United States, the company’s products also are available in over 75 countries worldwide.

The innovative, contactless, thermal entry system comes in a slimline panel tablet and is compatible with most existing gateway systems to ensure those entering the building are not running a temperature