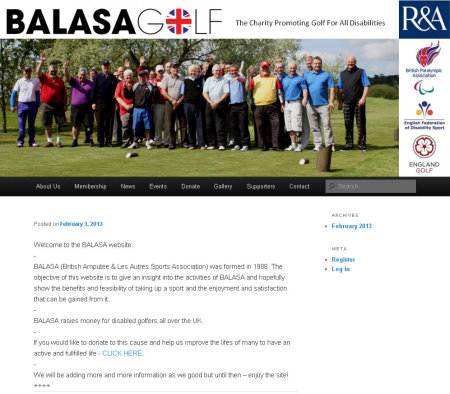 The day was attended by over 50+ able-bodied golfers + 10 disabled golfers from all over the South East of England and from as far away as Lancashire and Lithuania and was in aid of BALASA Golf – The Charity Promoting Golf For All Disabilities. Now in its fourth year the event raised money for the charity and also provided a platform on which to launch its new look website www.BALASA.org

The day began with the usual briefing and course orientation but as well as the usual Stableford competition, there was a Yellow Ball event, Longest Drive, 2 x Nearest Pins, Beat The Pro, a Putting Comp and Team Event. The day attracted two sponsors in the form of e-teeoff.co.uk Golf Vouchers and The London Golf Show.

There were also more donations to the cause from the likes of Woolston Manor GC (Essex) Westerham GC (Kent), HeverCastle (Kent), Surrey National & Woldingham GC (Surrey) – all TSG ‘Preferred courses’ as well as prizes donated by the internetgolfstore.co.uk and TheSocialGolfer.com website itself.

The main event and the now much coveted Halliwell Cup (donated by Stroke Victim Ian Halliwell) was eventually won on count-back by Cambridge based TSG member Barry Hill, with the Ladies Trophy won by Horley & Surrey based golfer Virginija Zlabiene. £5 of each player entry fee was donated to BALASA along with all the raffle funds, resulting in over £1k being raised for the charity!

Ian Mullins, Managing Director of TheSocialGolfer.com said: “We were hugely impressed with the way Bletchingley organised the event in 2012, so it was an easy decision to return to venue again this year. They have both the facilities, the location AND the course to make this a great day for our members and their guests. In addition, I never cease to be inspired by the BALASA golfers and they are an example to anyone with a disability to get out and play!”

Richard Saunders, Chairman of BALASA said: “TheSociaGolfer.com members have been supporting us for over three years now and in addition to this event, have provided us with their expertise in getting our new site off the ground and we are very grateful for their support. We believe we now have a strategy in place to build the charity and these monies will help us to build self-esteem and confidence among our members, helping them to both take up the game and compete in both UK and international competitions. What a wonderful day and superb bunch of golfers – we thank them for their generosity!”