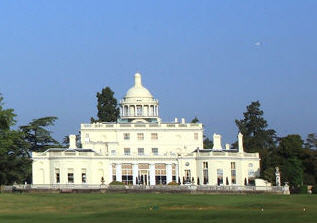 Stoke Park, the leading five star Country Club, Hotel and Spa, is to sponsor the inaugural Golf Book of the Year at The British Sports Book Awards, which in May this year celebrate its 10th anniversary.

Set in 350 acres of magnificent parkland, lakes, historic gardens and monuments created over the past 1,000 years, Stoke Park’s impressive leisure facilities include a championship golf course designed in 1908 by Harry Colt, widely considered to be one of the finest course designers of the 20th century.

“Stoke Park is delighted to be associated with the British Sports Book Awards in its 10th Anniversary. With the introduction of the new golf book award we recognise the value and importance of books within our game. Stoke Park’s history has been recorded over the past 1,000 years and we felt the opportunity to be involved with the Golf Book Award fitted perfectly with our heritage,” commented Stuart Collier, Director of Golf at Stoke Park

The judging panel for the Golf Book of the Year will be headed by veteran golf journalist, John Hopkins, who enjoyed a successful career with The Times for many years and remains a highly-respected freelancer writing for a variety of publications.

The new golf book award, which coincides with the introduction of a Motorsport Book of the Year, joins the already well-established categories of football, rugby, cricket and horse racing.

“We are delighted to have secured such a prestigious sponsor in Stoke Park for the inaugural Golf Book of the Year Award and look forward to welcoming them alongside our family of partners to The Savoy in May,” commented Omar Khan, co-owner of The British Sports Book Awards and Director of Khan Consulting.

The winners of the British Sports Book Awards 2012 will be revealed at a black tie dinner at The Savoy Hotel in London on 21st May when Nick Hornby will also be presented with a special award for ‘Outstanding Contribution to Sports Writing’, 20 years on from the publication of ‘Fever Pitch’.

To mark the 10th staging of the awards, the organisers have negotiated a 30-minute highlights programme of the awards ceremony which will be televised on Sky Sports TV on the 25th May. Both the ceremony and programme will be hosted by Natalie Pinkham (Sky Sports TV) and Rishi Persad (BBC TV Sport).

Following the Awards night, all category winners will then be entered into an online public vote via www.britishsportsbookawards.co.uk to find the Overall British Sports Book of the Year, the result of which will be announced on 11th June.

A Journey Through the Annals of The Golfing Annuals 1888-1910

The 100 Greatest Ever Golfers

The Caddy Chronicles: Book One – The Rookie Season