Ryder Cup 2018 Host Nation to be announced Mid May 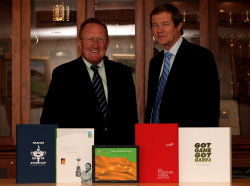 The official announcement comes at the conclusion of the first formal bid process undertaken by Ryder Cup Europe, which commenced at the end of 2008 and involved a comprehensive examination of Bids submitted by France, Germany, Holland, Portugal and Spain.

Richard Hills, Ryder Cup Director, said: “It has been a hugely challenging and stimulating process, taking almost 18 months to complete, and Wentworth Club is a highly appropriate location to announce  the Host Nation for The 2018 Ryder Cup .”

France, Germany, Holland, Portugal or Spain will follow Ireland in 2006, Wales in 2010 and the 2014 Host Nation, Scotland, by securing the right to stage the biennial contest in 2018.

Six countries initially submitted bids to host The 2018 Ryder Cup. Sweden withdrew before the Bid Documents were officially lodged with Ryder Cup Europe prior to April 30, 2010. The 2018 Ryder Cup Evaluation Panel then undertook a detailed process to validate the five bids, including site inspections in France, Germany, Holland, Portugal and Spain and, following legal consultation with all countries, each prospective applicant will be required to sign a legally binding Conditional Host Agreement.

Ryder Cup Europe will activate the contract with the successful candidate following the public announcement and Press Conference on May 17.

Hills commented: “We began the bid process with a focussed symposium in London by giving the process the codename of ‘Operation Level Playing Field’, and we believe we have adhered rigidly to that promise we made to the bidding nations.

“We subsequently embarked on a comprehensive process  of evaluation and validation of the bids, all of which we recognised as being of quite exceptional quality. The Ryder Cup Evaluation Panel visited all five venues over a three week period in April and May last year to appraise the progress being made by each country and to make site inspections.

“We were impressed by the level of commitment and clarity in the bids presented by France, Germany, Holland, Portugal and Spain as the process unfolded and the meticulous attention to detail in each Bid Document, which carried the unique stamp of each individual country.

“On May 17, we will be able to announce one gold medallist and four silver medallists. All five could have hosted The 2018 Ryder Cup, based on the detail and quality of their bids, and although one country will be successful, we look forward to continuing our close relationships with each one of those five countries in the future.”

Ryder Cup 2018 Bid Director, David MacLaren, added: “At the outset we said that we wanted to make the right sporting decision and the right commercial decision. We then set our five key criteria against which the Bids would ultimately be judged: provision of a world-class golf course; infrastructure required to deliver The Ryder Cup; Government, private and golfing support; Commercial opportunities for Ryder Cup Europe; and the contribution of the Host Nation to the development of golf.”

Wentworth Club played a significant role in the start of The Ryder Cup. The Surrey estate staged an International Challenge Match between the professionals of Great Britain and the United States in 1926, which was won by the hosts 13 ½ – 1 ½ .

Present at the match was the St.Albans seed merchant, Samuel Ryder, who enjoyed the contest so much that he was inspired to donate the solid gold trophy, which is now synonymous with the event. The first official Ryder Cup was played in June 1927 at Worcester Country Club in Massachusetts with the USA registering a 9 ½ – 2 ½ success. Players from Continental Europe became eligible to play in 1979 since when Europe have won eight times, the United States seven times with one match tied.

The announcement of The Celtic Manor Resort, City of Newport, Wales and The Gleneagles Hotel, Perthshire, Scotland, as the venues for the 2010 and 2014 Ryder Cups respectively, was made at Wentworth Club in September 2001. Europe regained The Ryder Cup with a 14 ½ – 13 ½ victory over the United States at The Celtic Manor Resort last October. The 2012 Ryder Cup will be held at Medinah Country Club, Medinah, Illinois, USA, from September 28-30.