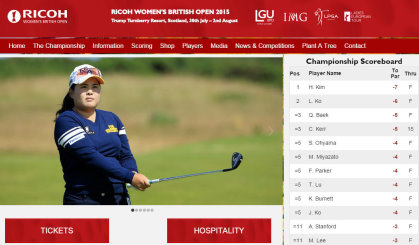 Global technology leader, Ricoh, signed an agreement with the Ladies Golf Union and IMG to continue as title sponsor of the Ricoh Women’s British Open through 2018.

Ricoh is a global technology company specializing in office imaging equipment, production print solutions, document management systems and IT services. This week, Ricoh is enjoying its ninth year as title sponsor of the Ricoh Women’s British Open making it one of the longest serving sponsors in women’s golf.

Jake Yamashita, Director, Corporate Executive Vice President, Ricoh Company, Ltd. explained, “The Ricoh Women’s British Open has continued to be the perfect platform to represent our brand worldwide and we are pleased to commit our future to the Championship until at least 2018. We are delighted with our association with this historic event which matches up so perfectly with Ricoh’s own global presence, brand values and rich heritage. From our first year magical year at St Andrews in 2007, we feel the Championship has evolved year on year and we are very proud to be announcing our further long term commitment here at the prestigious Trump Turnberry Resort.”

Trish Wilson, Chairman Ladies’ Golf Union’s, added, “This is fantastic news, not only for our Championship but for women’s golf. The long-term support of as prestigious a brand as Ricoh is invaluable to both our tournament and to the women’s game.  This is a partnership that works fantastically for all parties and this announcement today is a great testament to everyone involved in the Championship.”

Guy Kinnings, IMG’s Global Head of Golf added, “We are very happy that Ricoh has, once again, reconfirmed its commitment to this great tournament. Renewals are always very satisfying as it shows how successfully the partnership has delivered on its sponsorship goals and commitments for all involved. It is a testament to the entire Ricoh Women’s British Open team that Ricoh is making this announcement today and I would like to express my thanks to Ricoh for their support and to congratulate the whole Championship team.”

Woburn Golf Club and Kingsbarns Golf Links will host the Ricoh Women’s British Open in 2016 and 2017 respectively with this week’s Championship being played on the Ailsa Course at the Trump Turnberry Resort.

The Ricoh Women’s British Open was founded by the LGU in 1976 and is staged in conjunction with IMG, the world’s largest sports marketing company, since 1984. The event has been co-sanctioned by the LPGA and LET since 1994 and gained Major status in 2001.

Ricoh, a global technology company specialising in office imaging equipment, production print solutions, document management systems and IT services, has been the title sponsor of the Ricoh Women’s British Open since 2007.