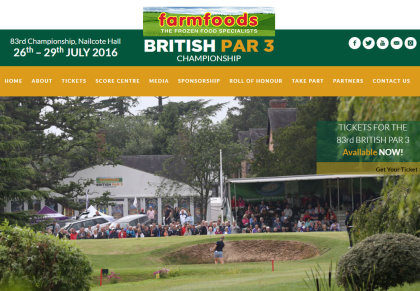 One of the biggest golfing events in England, the Farmfoods British Par 3 Championship will be raising its prize fund again to a record figure in 2016. As testament to the event’s success, the prize fund has been increased by 20% to a record €150,000, with the winner taking home a cheque for €50,000.

This added incentive will draw some of the finest up-and-coming golfers in the country, as well as a host of senior stars, further raising the quality of play and the reputation of the overall event. Another bonus for competitors is that the Professional Championship takes place over two days, compared to four days which is standard in most professional golf tournaments.

The prize fund has increased rapidly in recent years from £25,000 in 2010 which has coincided with the Championship attracting scores of high quality players and increasing recognition in the golfing world. Rick Cressman, owner of Nailcote Hall where the Championship is hosted each year, commented: “The increase in prize fund is another step forward for this special event and we are delighted to host the Championship which continues to develop and expand year after year.”

The 2016 edition of the Championship will be hosted for the ninth successive year by two-time Major winner and the most successful Ryder Cup captain of all-time, Tony Jacklin CBE. “I’ve had a long association with the Championship and it’s been a pleasure to see it grow in size and stature,” said Tony. “When I first started hosting the event, the first prize was was £5,000 and now it’s €50,000 which just shows you the progress that has been made in such a short space of time.”

The event also plays host to two Celeb-Am days graced by some of the nation’s best loved TV and sports personalities. This year’s event will take place 26th-29th July 2016 and spectators are more than welcome to attend any or all days of the Championship which is covered every year by Sky Sports. The event is fully managed by leading brand agency Champions (UK) plc. Managing Director Matthew Hayes commented: “The whole team work extremely hard to make the Championship bigger and better each year to ensure we deliver for our spectators, supporters and sponsors, who are so crucial to the success of the event.”

Male and female professionals can still qualify for the Championship at the qualification event taking place at Nailcote Hall through the Eagle Tour on Monday 6th June, and for amateurs the Open Par 3 Championship Qualifier which includes the Ladies/Mens Open on Sunday 12th June and the Junior Open on Sunday 26th June for 9-15 year olds.

Entries can be made through http://www.theeagletour.co.uk/tournaments/the-british-par-3-championship-qualifier/ and The Open Par 3 Championship through www.openpar3championship.co.uk/