Race to Dubai Rankings converted to points for 2015 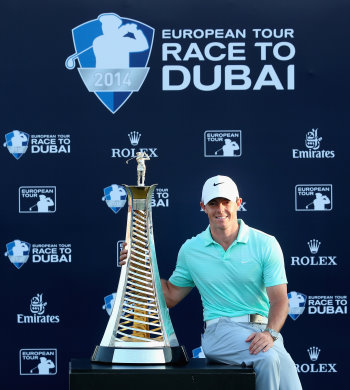 The 2015 Race to Dubai, which begins this week with the Nedbank Golf Challenge and culminates in the DP World Tour Championship, Dubai from November 19-22, will operate on a points system for the duration of its 47 tournaments.

From this week until the Hong Kong Open, which brings the regular season to a close on October 25, 2015, every euro earned by a player competing in a European Tour event will be converted to a Race to Dubai point.

Therefore, whilst a player’s official winnings in euros will still be recorded in his career record, The Race to Dubai Rankings will be purely points based from this season onwards.

After the Hong Kong Open, the Final Series – which will again comprise four tournaments, each worth a total of ten million Race to Dubai points – will get underway with the BMW Masters.

On completion of the DP World Tour Championship, Dubai, the number one player in The Race to Dubai Rankings will succeed Rory McIlroy as the winner of the Harry Vardon Trophy.

Keith Waters, Chief Operating Officer of the European Tour, said: “Following the success of The 2014 Race to Dubai, won by Rory McIlroy for the second time in three years after a superb season, The European Tour has decided to implement a points system for the duration of the 2015 campaign.

“We believe that changing to a points system will help simplify and indeed enhance the narrative structure of The Race to Dubai, and particularly the Final Series which will again carry a combined 40 million points, with 1,666,600 points on offer to the winner of each event.

“The conversion to a points system will complement an exciting and robust schedule in 2015, which will feature a minimum of 47 tournaments, including the addition of five new events.”