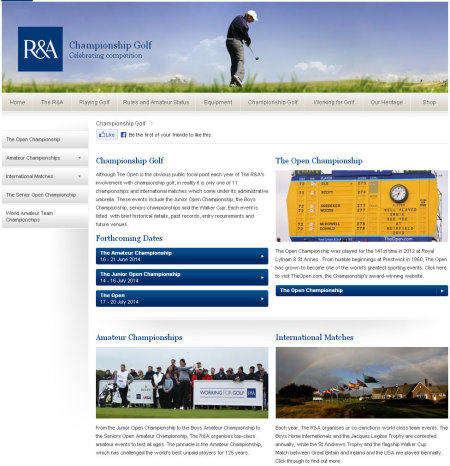 The R&A has announced the venues for its amateur championships in 2016 which include some of the finest courses in Great Britain and Ireland.

Royal Porthcawl in Wales will host the Amateur Championship for the seventh time and the first occasion since 2002 when Spain’s Alejandro Larrazabal triumphed over Englishman Martin Sell by one hole in the 36 hole final. The preliminary stroke play rounds will also be played at Pyle & Kenfig on the South Wales coast.

It will be the 121st staging of the Amateur Championship which features a field of 288 world-ranked amateur players with the winner earning a place in The Open Championship and the following year’s US Open. Traditionally the winner also receives an invitation to The Masters.

In recent years more than half of the 252-strong field has come from across Europe, America, South America, Africa and Asia and the 90th staging of the championship will attract a strong international field once again.

Some of the game’s leading players including Sandy Lyle, Jose Maria Olazabal, Sergio Garcia, Padraig Harrington, Lee Westwood, Graeme McDowell and Luke Donald have played in the Boys Amateur over the years. The 2012 champion, Matthew Fitzpatrick, went on to win the Silver Medal as the leading amateur at this year’s Open Championship and the McCormack Medal as the world’s leading male amateur player.

Peter Dawson, the Chief Executive of The R&A, said, “We are delighted to have such excellent championship venues in 2016. Royal Porthcawl and Pyle & Kenfig will be wonderful venues for the Amateur Championship and we expect the Welsh galleries will relish the opportunity to see leading amateur players in action.

“Muirfield is one of the finest links courses in the world and will provide a stern challenge for the leading boy golfers in the Boys Amateur Championship.”

Elsewhere, the St Andrews and Jacques Leglise trophy matches between Great Britain and Ireland and the Continent of Europe will be played at former Open Championship venue Prince’s in Kent for the first time.

It will also be a first visit for the Boys Home Internationals to Ireland’s most northerly golf course, Ballyliffin (Glashedy Links), which has hosted European Tour and Ladies’ European Tour events.

The Seniors Open Amateur Championship will return to Merseyside at Formby, which hosted the inaugural event in 1969.

The dates for the championships in 2016 are as follows: