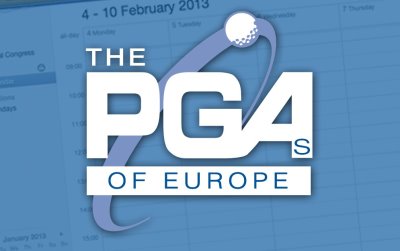 The 2013 PGAs of Europe provisional tournament schedule has been announced with all 2012 tournaments and Pro-Ams making welcome returns to this year’s calendar.

Following an exciting 2012 with tournaments played out across the continent, the 2013 schedule will get under way with the Kempinski “The Dome” Pro-Am hosted once again by Antalya Golf Club in early February(Entry Form available for download at http://bit.ly/VpsVb2).

The PGAs of Europe Fourball Championship closely follows again taking place at Lumine Mediterránea Beach and Golf Community, Spain, and this year has been expanded to be played across the ‘Lakes’ and the ‘Hills’ courses, allowing for up to 120 pairs to compete (Entry Form available for download at http://bit.ly/WLUGMf).

The 8th Aegean Airlines Pro-Amsees it return to the magnificent Costa Navarino in late May/early June, and as with the Fourball Championship has been expanded to be played across two courses – the critically acclaimed Dunes and Bay layouts.

The schedule then pays two visits to Bulgaria with the Black Sea Rama Pro-Am in July followed by the UniCredit PGA Professional Championship of Europe in late September.  Portugal’s Hugo Santos will be aiming to make an historic hat-trick at the PGAs of Europe’s flagship event as the 2013 edition returns to the wonderful surroundings of Pravets Golf and Spa Resort in Bulgaria with competitors again battling it out for the €10,000 first prize.

The year concludes in November with the BEKO Classic, won last year by Simon Edwards, and the International Team Championship, in which Scotland prevailed as 2012 champions for the seventh time in the tournament’s 23-year history.

Further information for each tournament will be released prior to the competition. Keep checking www.PGAE.com for more details