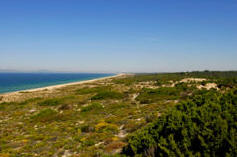 Portugal has launched its bid to host the 2018 Ryder Cup with the support of Don Jaime Ortiz-Patiño, the founder of Valderrama, the venue of the 1997 Ryder Cup matches.

A delegation, led by the Portuguese Golf Federation and the Comporta Links Resort project and also backed by the Portuguese Ambassador, António Santana Carlos travelled to the recent Ryder Cup at the Celtic Manor Resort in Wales to meet with top Ryder Cup officials and introduce their ambitious plans at an informal media launch attended by over 100 journalists from both sides of the Atlantic.

Patiño also attended the media launch and explained to assembled journalists exactly why he supported the Portuguese bid.

The Portuguese bid is based at the new €1 billion golf and leisure development at Herdade da Comporta, close to the village of Comporta on the idyllic Alentejo coastline, where acclaimed American designer, Tom Fazio, has combined with European Golf Design, to build a brand new purpose-built Ryder Cup championship course that sits on rolling land close to the sea.

The Comporta Links, Fazio’s first creation on this side of the Atlantic, is destined to become feted as one of Europe’s finest courses and it will become the focal point in Portuguese plans to develop the Alentejo Coast alongside the Algarve and the Lisbon Coast as the country’s third golfing destination.

In time, the area, which is blessed with one of the last unspoilt coastlines in Western Europe, will feature eight courses, including a second at Herdade da Comporta, designed by David McLay Kidd, the architect behind the new Castle course at St Andrews. Comporta Links will also be a case study for the Golf Environment Organisation (GEO) Legacy programme There will also be 32 hotels, fine restaurants and a wide range of other tourist amenities – all designed to enhance Portugal’s well-deserved reputation as a high quality tourist destination and to bring 15,000 much-needed jobs to the local community.

The development of the Alentejo Coast has already started but the Portuguese see a successful Ryder Cup bid as the ideal way to accelerate it and to reinforce its reputation as one of the foremost golfing destinations in the world.

A successful bid will also substantially enhance the legacy that is left to Portugal and its people and will provide The European Tour with a significant revenue stream for many years to come.

“We entered the bidding process later than the other contenders but we genuinely believe we have come up with a proposal that the European Tour, the PGA and the PGA of Europe will find hard to discount,” said Miguel Franco de Sousa CEO, of the Portuguese Golf Federation.

“Our job, at this stage, is to make it difficult for the Ryder Cup authorities to ignore us and that’s exactly what we have done. The bid provides a Trophy course which we are convinced will soon be regarded as the finest in Continental Europe and a resort which will be developed with environmental sustainability very much in mind.

“It’s also the only bid that will significantly affect the growth of the GDP of the host country and will leave a lasting legacy for The European Tour, both by guaranteeing support for 36 tournaments over a 12 year period and by providing the Tour with a significant equity-based return.

“Finally, unlike Wales, and some of our fellow bidders, we can all but guarantee fine weather when the Ryder Cup is played,” Manuel Agrellos the Portuguese Golf Federation President added. “Comporta enjoys 2,785 hours of sunshine a year and is mild enough for year-round golf. The annual rainfall is only 600mm and there are more than 280 rainless days a year.”

The new Herdade da Comporta development is situated 110 km from Lisbon and 140 km from the Algarve, and is owned by the Espírito Santo Group, one of the largest corporate groups in Portugal and the owner shareholders of the country’s second largest private bank, Banco Espírito Santo.

The Espírito Santo family has owned the 25,000 acre site for over half a century and has plans to build two golf courses, a state-of-the-art golf academy, two 5-star hotels, two Apart-Hotels and a wide range of real estate all built to the highest environmental standards.

“My family has been involved in the game of golf for many years, though our support of the World Ladies Amateur Team Championship with the Espírito Santo Trophy. In addition my Uncle Ricardo Espírito Santo was the first President of the Portuguese Golf Federation. It goes without saying that we are greatly honoured to be supporting this Ryder Cup bid.” said Manuel Fernando Espírito Santo, Chairman of Espírito Santo Tourism.

It is a low-density tourism concept, with strong emphasis on sustainability and blends perfectly with the area’s traditional activities, which include rice and wine production. The project also entails restoring and improving the natural heritage and protecting its habitat for generations to come.

The Comporta Links course is a case in point and in time will surely come to be regarded as the benchmark in environmental sustainability. When Fazio and European Golf Design (EGD) were signed up they were tasked

(a)    to design a course destined to be ranked as one of the finest in Europe,

(b)   to adhere to a stringent set of environmental standards and

(c)    to build it specifically with hosting the Ryder Cup in mind. It was no easy assignment but initial feedback suggests they have succeeded in all three areas.

The Comporta Links is destined to be regarded as masterpiece and at 7,867-yards from the back tees will provide a formidable test for the European and American teams.

The course has been designed to be played like a fast running links and indigenous shrubs will be retained as both features and hazards. The designers have worked closely with the Golf Environment Organisation (GEO) to ensure the impact on the environment is minimised and the natural beauty of the area is retained.

One man who is impressed by the vision is Patiño, who as founder of Valderrama hosted the 1997 Ryder Cup and no less than 16 Volvo Masters between 1988 and 2008. In May 2010 the Bolivian-born Patiño was made an Honorary Life Vice President of The European Tour in recognition of his service to golf in Europe.

Patiño is one of the most respected figures in European golfing circles and he has no doubt the developers are on to a winner at Comporta. “What they have got is a unique piece of land with stunning vistas and great natural conditions to develop a great golf course and golf destination,” he told journalists at the media launch.

“I believe Portugal deserves to host the 2018 Ryder Cup because it is the only candidate that is a genuine golf destination. You don’t go to Germany or the Netherlands to play golf but that’s exactly what you do when you go to Portugal,” he continued. “Portugal has a long heritage in welcoming golfers and that contribution deserves to be recognised by a successful bid.”

Portugal is one of five countries bidding to host the 2018 Ryder Cup. The winning venue is expected to be announced in April 2011.