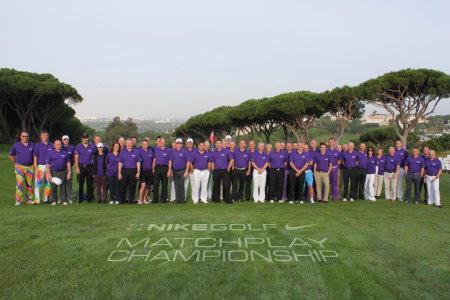 Following a highly-successful event in 2013, Nike Golf is delighted to announce it will continue to sponsor this year’s amateur Matchplay Championship in the UK, further demonstrating the brand’s determination to help grow the game of golf by inviting club golfers to compete in the stellar event that reaches its conclusion at the stunning Vale do Lobo resort in the Algarve in January.

The Matchplay Championship was launched in 1996 and consists of a Better Ball and Individual competition, with 5,717 golf club members from approximately 1500 different golf clubs competing in the event in 2013, with 3,350 matches taking place between June and September.

“Nike Golf is once again delighted to be a part of this prestigious tournament that inspires golfers to get out and compete with other like-minded athletes of all abilities,” said Angus Moir, Nike Golf EMEA General Manager.

“In addition to supporting our elite athletes on the European and PGA Tour, we are also committed to growing the amateur game in the best possible ways, and we feel that initiatives such as the Nike Golf Matchplay Championship is an ideal platform to do so,” he added.

In total, over 40 golfers will play at Vale do Lobo in January 2015, with flights from the UK to Faro included in the prize. Players will enjoy five nights luxury accommodation at the resort, as well as a practice round and four competitive rounds, two of which will be played on the Royal Course and two on the Ocean Course.

David Hughes, Managing Director of GMM Ltd, event managers, said “This is a major coup for the competition, Nike Golf is a great partner to have for the Matchplay Championship, we are very excited to have such a high profile global brand as our title sponsor to take the 2014 Matchplay Championship to the next level.”

As part of the package, Nike Golf will supply polo shirts and balls to the competitors as well as offering prizes for the eventual winners.

The event is open to all current golf club members, male and female, with an active CONGU handicap. Competitors play four rounds of knock out matchplay golf in their region between June and September and the winners from each region qualify for one of the eight regional finals in October. From the eight regional finals in October, 19 pairs progress to the Vale do Lobo final. In the singles, there is a National Final with eight players qualifying for the Algarve finale.

Entry to the event costs £48 per betterball pair, and £25 for individual players. For more details on the Nike Golf Matchplay Championship please visit www.matchplay.co.uk