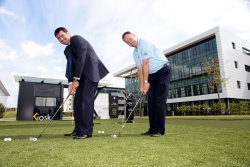 The sponsorship deal between Scottish golf pro Alistair Forsyth and the Maxim Office Park near Glasgow has been extended until the end of 2010.

The relationship between European tour professional Alistair and Maxim began in 2008 and has seen him promote the park while playing in competitions around the globe.  Alistair also helped with the design of Maxim’s PGA accredited, nine hole putting green which is sponsored by Callaway and stretches in front of the park’s Building Four.

The deal helps Maxim retain a strong brand presence at both home and abroad thanks to Alistair featuring the park’s branding while competing. He also takes time out for a number of personal appearances across the year to promote Maxim’s overarching vision of a greater work life balance for its employees.

Commenting on the sponsorship renewal, Alistair said: “I was excited from the outset to be part of the Maxim vision and proud of being asked to design an all weather putting green to enhance that vision of an ideal work life balance. Now the park is open and the vision a reality, you can see they’ve achieved something quite special.”

Maxim park director Scott McKie added: “Maxim has built up a great relationship with Alistair and he’s proved to be a first class ambassador for the park and what we’re aiming to achieve here. It’s an association which works fantastically well for both parties so we’re obviously delighted to continue working together.’’

Sport management company 110Sport, who represent Alistair, also welcomed the contract extension. A spokesman said: “110sport is delighted to work alongside Maxim and we’re very excited about the partnership continuing in the future.”