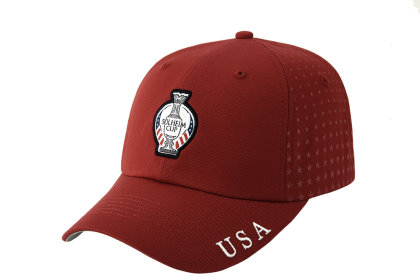 Imperial Headwear has been named the Official Headwear of the U.S. Solheim Cup team at St. Leon-Rot Golf Club near Heidelberg, Germany, 18-20 September.

“Imperial Headwear is very excited to be the Official Headwear of this amazing event,” says David Shaffer, director of marketing at Imperial Headwear. “Being able to say Imperial outfitted the United States team headwear is a great testament to our brand and product quality.”
This biennial, trans-Atlantic team match-play competition matches the best U.S.-born players from the Ladies Professional Golf Association (LPGA) Tour and the best European members from the Ladies European Tour (LET).
“Imperial Headwear has been a wonderful, long-time partner of the LPGA,” says 2017 Solheim Cup tournament director Chris Garrett. We are thrilled that the U.S. team will be wearing Imperial as they look to win back the Cup in Germany next month.”
The U.S. squad holds an 8-5 lead in the series, which began in 1990, and is coming off back-to-back losses (2011, 2013) for the first time in history. Juli Inkster is captain of the U.S. Team, while Sweden’s Carin Koch leads the European squad.
“From an event perspective, it doesn’t get any bigger than the Solheim Cup in ladies professional golf,” says Darren Schubert, events manager at Imperial Headwear. “We are truly honored to have the best players in the world wearing Imperial during competition.”
Founded in 1916, Imperial Headwear is a leading manufacturer and marketer of premium quality headwear for the golf market. Imperial Headwear’s 100th Anniversary video can be viewed at https://vimeo.com/131945482
Imperial Headwear www.imperialsports.com

For more information about the Solheim Cup and updated standings for each team, log on to www.solheimcup.com www.lpga.com and www.solheimcupeurope.com