GolfSixes prepares to tee off at Oitavos Dunes

Three Ryder Cup winners will bring their star quality to this week’s GolfSixes Cascais, with Jamie Donaldson of Wales, Scotland’s Stephen Gallacher and Italy’s Edoardo Molinari leading their respective nations into battle for the six-hole event, which is being held Oitavos Dunes in Portugal from from June 7-8.

The groups have been released for the return of the shootout tournament, which, for the first time, takes place outside of England and in the resort of Cascais, near Lisbon, and the local fans will be treated to a host of intriguing matches on day one. 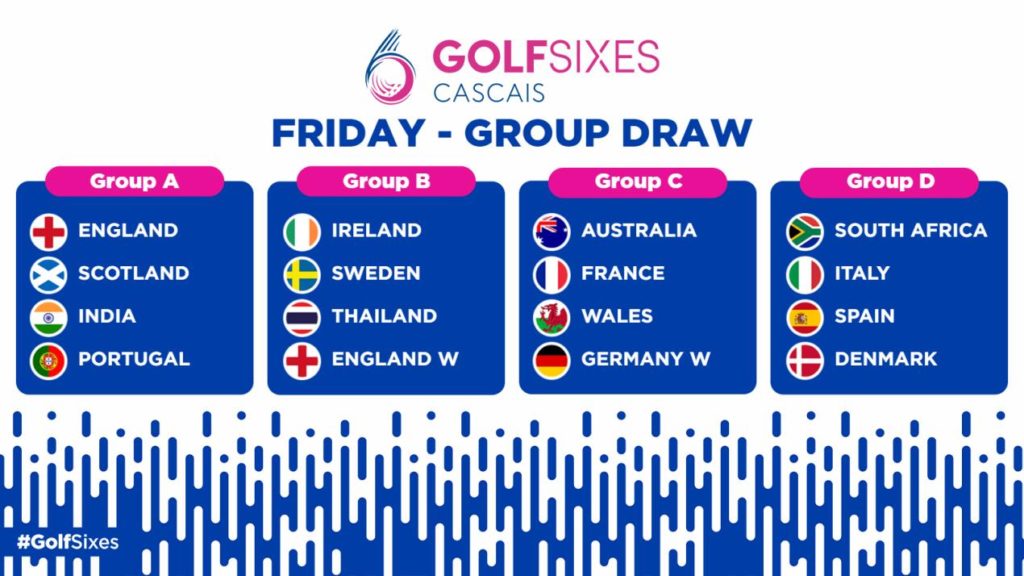 Joining those two teams in Group A will be Scotland – with 2014 Ryder Cup winner Gallacher joined by his fellow winner on the 2019 Race to Dubai David Law – and they will face an India team featuring S S P Chawrasia and Gaganjeet Bhullar in their opening tussle.

The 2018 champions Team Ireland – Paul Dunne and Gavin Moynihan – will begin their title defence against an England Women’s team comprising Meghan MacLaren and Florentyna Parker, who have five Ladies European Tour titles between them.

They are joined in Group B by Sweden’s Alexander Björk and Joakim Lagergren and Thailand’s Thongchai Jaidee and Pachara Khongwatmai, who face off in the opening match of their group on Friday morning.

Team Italy will be led by 2010 Ryder Cup star Molinari, who will be joined by exciting young prospect Renato Paratore as they take on Team Denmark – comprising 2018 European Challenge Tour Number One Joachim B Hansen and Jeff Winther – in the final match of the opening session.

Two more sessions will make up Friday’s action and the top two teams in each group will progress to Saturday’s quarter-finals, when the knockout drama gets underway. After the semi-finals and a third and fourth place play-off, the winner will be decided on Saturday afternoon in the grand finale.

The exciting two-day tournament is being played over a Friday and Saturday for the first time. With the UEFA Nations League Final and Third-place play-off taking place in Portugal on June 9, an exciting weekend is in store for Portuguese sports fans and tourists alike.

In addition to being broadcast live on Sky Sports, the tournament will also be accessible for golf fans on the BBC’s digital channels for the first time this week. Viewers without Sky will be able to catch the action on the BBC Sport website and app, BBC iPlayer on desktop, BBC’s iPlayer app and the connected red button BBC channel.

Rufus Hack, the European Tour’s Chief Content Officer, said: “GolfSixes has been one of our leading lights in the drive for innovation in golf as we continue to reach out to new audiences, and this agreement with the BBC means this week’s event will be available to an additional audience than those watching on Sky Sports. We are committed to growing and developing this format, which has been extremely popular among young people in particular, and we have no doubt fans watching on BBC’s digital channels will enjoy the excitement GolfSixes Cascais provides as nations from across the world – men and women – battle it out for the title.”

The GolfSixes format has not only proven a huge success on the European Tour – with the 2018 Ryder Cup also featuring the concept as part of its build-up at Le Golf National – but it has also been adopted across the grassroots of golf. The Golf Foundation has – in association with the European Tour, the R&A, England Golf, Wales Golf and Scottish Golf – launched a GolfSixes League throughout Britain for juniors. Since May, 24 leagues have been staged across 22 UK regions, involving 112 clubs and nearly 1,500 junior golfers. Early results showed that nearly 30% of participants have been girls. The GolfSixes concept has also been rolled out in England, Belgium, Denmark, France and the Netherlands and qualification events have taken place in those countries, with the winners earning a spot in the GolfSixes Cascais Pro-Am.

As golf clubs prepare for the end of the summer season, Golf Genius’ comprehensive winter league package presents a golden opportunity to capitalise on the increased levels of participation seen throughout 2021.

Titleist’s new Scotty Cameron Phantom X 9.5 Triple Black putter, which goes on sale from October 8, is a high-MOI mallet that boasts many of the same features found in the Phantom X 5.5 and Phantom X 11 models, but with a matte black finish and an integrated flange-sole component that makes for easier alignment.

Outdoor sports and recreation business Vista Outdoor, among whose brands include Bushnell Golf, has entered into a definitive agreement to buy Foresight Sports for $474 million.