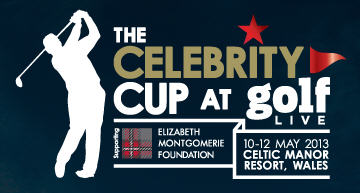 The Gleneagles® Hotel has announced they will be sponsoring the Celebrity Cup Scottish team at Golf Live taking place at Celtic Manor Resort from Friday 10th – Sunday 12th May.

The Celebrity Cup will see 24 celebrities battle it out over two days representing England, Ireland, Scotland and Wales to claim the inaugural Celebrity Cup.

Six celebrities will play on each team in a round robin format with each team playing against each other. An official Celebrity Cup practice will take place on Friday 10 May with the qualifying matches taking place on Saturday 11 and Sunday 12 May; the final will be played on Sunday.

The confirmed Scottish team includes Gavin Hastings (Captain), Jamie Murray, Kenny Logan, Alan Hansen and Kenny Dalglish. The culmination of the event will be on Sunday afternoon when the top two teams from the previous rounds will play off for the title with the prize giving being presented by none other than Ant and Dec alongside the event ambassador Colin Montgomerie.

James Goode, Celebrity Cup Event Director, said: “We are delighted to welcome one of our most committed exhibitors, Gleneagles – Host Venue of The 2014 Ryder Cup, as The Celebrity Cup Scottish team sponsor. It will complement the team of sporting stars and profile the venue outside of Scotland to committed golf fans.”

Patrick Elsmie, Gleneagles’ Managing Director said:  “We’re very excited to be sponsoring the Scotland team as they battle it out against the other home nations in the celebrity cup. It’s a brilliant opportunity to raise the profile of Gleneagles and the Home of Golf, and I’m sure it will also be a fantastic day’s entertainment. We wish all of the teams the very best of luck and look forward to the tournament with great anticipation.”

The Gleneagles Hotel will host the 40th Ryder Cup Matches, which will be played on The PGA Centenary Course from 26-28 September, 2014.